You are at:Blog»Android»Vivo V9 Review: Is This Budget iPhone X-lookalike a Worthy Competitor?

This year at the Mobile World Congress, Vivo showcased its ambitious concept phone which flaunted an all-screen look without any notch or bezel for the front-facing camera. Though, the device was called a ‘concept phone’ and the chances of getting a commercial version of this model look scarce at the moment. A month later, the company introduced another innovative smartphone device called Vivo V9 in India. Vivo played it safe by bringing an iPhone X-like notch on the device to offer bezel-less design.

Design-wise the new Vivo smartphone looks exactly an iPhone X clone. Though the phone is priced at Rs 22,990 and it is a mid-range flagship smartphone. Apart from the iPhone X-like design, the phone certainly has many impressive aspects. And, it is noticeably cheaper than the Apple iPhone X. So the question is, does Vivo V9 have the knacks to be your next smartphone? Let’s find out. 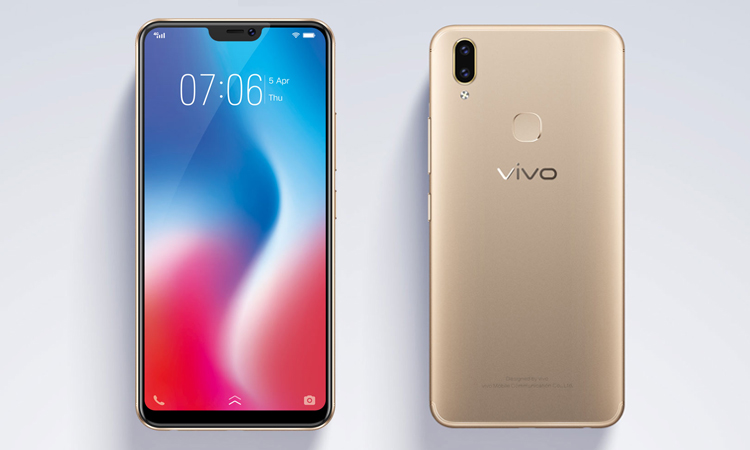 Design-wise, the new Vivo phone might look similar to the iPhone X; however, you can immediately notice the difference in between these two phones when held in your hands. There is a huge difference in the build quality of both devices. Vivo V9 is built with a plastic body with a metallic finish. The handset features a 19:9 aspect ratio display with smaller bezels.

The power and volume rockers are present on the right edge of the device, whereas the left edge is taken by SIM card tray. The bottom of the phone has a micro USB port. Also, there is a single speaker setup offered at the bottom. The sound quality is decent for a sub-Rs 25,000 device. And there is a 3.5mm headphone jack offered on the device which is useful for using bundled or your favourite headphones with the handset.

At the rear, there is a vertically stacked dual camera module which looks identical to the iPhone X. Furthermore, there is a dedicated fingerprint scanner offered on the device where the iPhone X lacks. Coming to the display, the handset brags a 6.3-inch Full HD+ IPS screen which is protected by Corning Gorilla Glass 3. The display is amazing for indoor usage; however, you will find it difficult to read while using it outdoors.

Like mentioned above, the latest Vivo smartphone is equipped with a Qualcomm Snapdragon 626 processor paired with 4GB of RAM and 64GB of internal storage. Being a mid-range device, the Vivo V9 can reasonably handle pretty much anything you throw at it. The storage of the phone can be expanded up to 256GB via microSD card.

The facial recognition feature on the device works flawlessly. As soon as you will look at your phone, it will unlock itself in a fraction of seconds. This works well in good lighting conditions. While in low-light conditions, it will find difficult to detect your face. Anyways, it has a fingerprint sensor, so you can unlock the device using your finger if the face unlock doesn’t work.

The handset runs on Android 8.1 Oreo operating system powered by FunTouch 4.1 UI on top. The UI of the device resembles the one of the latest iOS version. You will notice that the phone comes with a bunch of bloatware apps. Also, it has gesture-based navigation which is useful to perform or access specific apps quickly.

Lastly, the battery performance of the handset is fairly decent. The phone runs almost a day long on a single charge. However, fast charging technology could have provided a better experience. The vertically stacked dual camera setup of 16MP + 5MP sensors is coupled by a single LED flash module. The camera is capable of capturing detailed photographs in outdoor light settings. While said so, the phone also performs quite well in dimmer light conditions. The rear camera offered on the device won’t disappoint you even in low light.

When zoomed in, the camera gives noise, but it’s obvious for a smartphone camera. You can’t expect crystal-clear zoom images on any smartphone device. Up front, the phone brags a 24MP selfie shooter which is enhanced by AI-powered beautify mode. Regardless of the megapixel count (in a good sense), the front camera is ideal for selfies and video calling.

As a mid-range handset, the Vivo V9 performs very well. However, you can’t expect flagship-like performance on the device. It surely does not stand a chance to compete against the likes of Samsung Galaxy S9 and Apple iPhone X. The overall experience of the latest Vivo mobile is convincing. At a price point of under Rs 25,000, the Vivo V9 will compete with Oppo F7, Honor 8 Pro, and Moto X4.