You are at:Blog»News»Huawei Dominates the Chinese Smartphone Market: Report

The Chinese smartphone companies are soaring high with their terrific growth in other countries, such as India. Also, the Chinese brands such as Huawei, OPPO and Xiaomi are shining back in their home country. The latest research by Counterpoint points that the domestic brands captured a notable 87 percent of the Chinese smartphone in Q2, 2017.

The research from Counterpoint’s Market Monitor service suggests that the smartphone shipments in China grew 3 percent annually during June end, 2017.

The Research Director, James Yan, said, “June seasonally is a strong month for China as it is usually buoyed by portfolio upgrades from major brands such as OPPO, Vivo and Xiaomi. The top four Chinese brands now capture close to 69 percent of the market as these brands have raced ahead of international and other local brands with expansive distribution reach and exciting portfolio.”

The fastest growing brands were Huawei and Vivo followed by OPPO and Xiaomi. This positive growth has somewhat blemished Apple’s dreams of entering the Chinese market. Apple registered a meagre 8.2 percent share in Q2, 2017. This value is 0.3 percent down from the same period in last year. 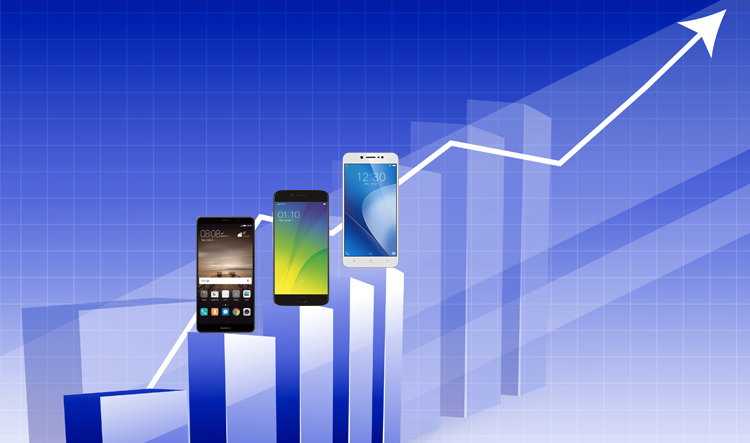 On the other hand, Xiaomi recorded a 13 per cent market share. This is an improved value as compared to the 11 percent share last year. This great comeback can be strongly attributed to the positive response that the latest flagship Xiaomi Mi 6 received. Even the affordable smartphones as Redmi Note 4X cannot be ignored.

In the meantime, Huawei continued to rule with a 20.2 percent share. It left a small margin for OPPO at 18.8 percent.

As per the Associate Director, Tarun Pathak, the credit of Huawei’s success goes to more shipping and a good demand for Nova and Enjoy series and the P10.

The report further predicts that Chinese brands will make attempts to expand their reach. The key markets to drive market share are India, South Asia and Africa.

With their competitive pricing and aggressive marketing, Chinese brands are slowly taking over the world.