You are at:Blog»News»Redmi K20 Pro Could Launch as the Snapdragon 855 Flagship Smartphone

In the last couple of weeks, it has become pretty evident that Xiaomi is working on a new flagship smartphone under the Redmi branding. This smartphone will run on the powerful Snapdragon 855 processor. Until now, all the Redmi smartphones that we have seen till date have launched with affordable price tags. Even the upcoming Redmi flagship is expected to be priced competitively and it will take on the other flagship smartphones that come high-priced. Interestingly, it has now been revealed that this upcoming Redmi flagship will be named the Redmi K20 Pro. 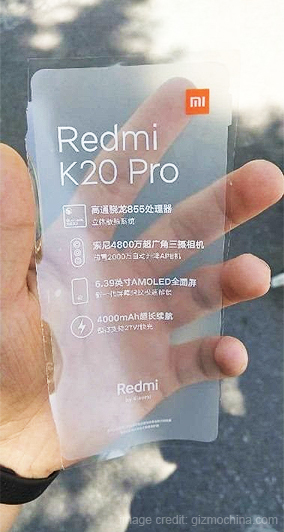 The smartphone will come with a 6.39-inch AMOLED display. 6-inch display mobile phones have become widely popular regardless of the price tag. The display will also feature a new-gen in-display fingerprint sensor. Under the hood, it will be fuelled by the flagship SD 855 processor. It will be further powered by a powerful 4000mAh battery. With quick charging mobile phones on a trend, even this smartphone will receive 27W fast charging support.

On the camera end, Redmi K20 Pro will feature a triple camera setup. The camera specifications have not been disclosed as of now. However, it has been rumoured that the smartphone will sport a 48MP primary camera, a 13MP secondary camera and an 8MP ultra-wide lens. On the front, the pop-up selfie camera will support a 20MP camera with AI functionalities. Other connectivity features will include a 3.5mm headphone jack and NFC support.