You are at:Blog»Latest Updates»Best of 10 Year Challenge Posts From Across the Internet

The first social media trend of 2019 is already here and it has caught on like wildfire. There’s a small possibility that you might not have come across the 10 year challenge posts on your Instagram, Twitter and Facebook. But if you haven’t, then here’s what it is – people all across the globe are sharing pictures either of themselves or the changes that they have seen from 2009 to 2019. Right from celebrities to netizens, almost everyone is seen taking part in this challenge. And, why not? The challenge brings ‘bout a whole sense of nostalgia. People have also taken this challenge as an opportunity to talk about issues like global warming and the Syrian civil war. This challenge has brought forth some amazing pictures that will make you laugh as well as pictures that will show you the drastic changes 10 years can have on us. We have compiled some of the best #10YearChallenge posts for you. So, without further ado, here are some of the best #10YearChallenge posts.

Best 10 Year Challenge Posts That Will Make You Laugh 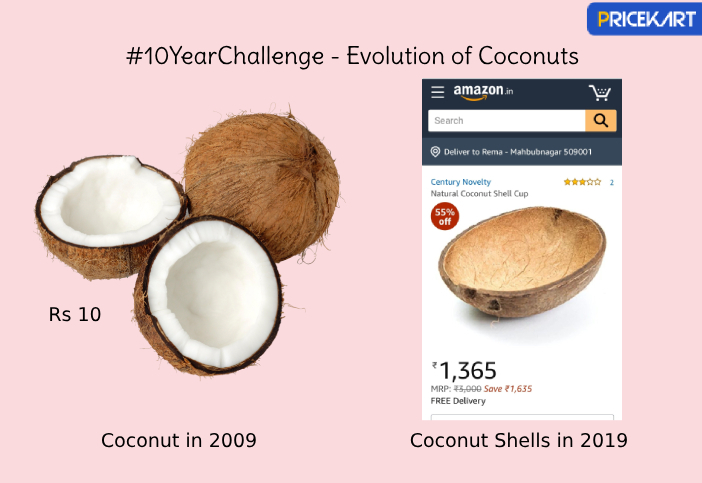 Back in 2009, coconuts were sold for as less as Rs 10-15. It’s a fact that living expenses have gone high, but how high have they gone? This post is coconuts (and also true)! The next time you plan on throwing away a coconut shell, you may want to think twice. Twitter was on a role when Amazon India listed a coconut shell priced at Rs 1,289. Yes, you read that right. And, what’s absolutely hilarious is the product description which reads – ‘This is an actual, real coconut. Therefore, it may have dents, cracks and imperfections.’ Sigh, if only we had known the value of coconut shells, we never would have tossed them in the trash. Another funny picture that has emerged between the 10 year challenge posts is the evolution of Aunt May in the Spiderman movies. If you enjoy the Marvel movies or if you have seen all the Spiderman movies then you must have noticed how aunt May got younger with every movie. In fact, she got so young, that I don’t think it would be fair to call her aunt May anymore. What do you think? 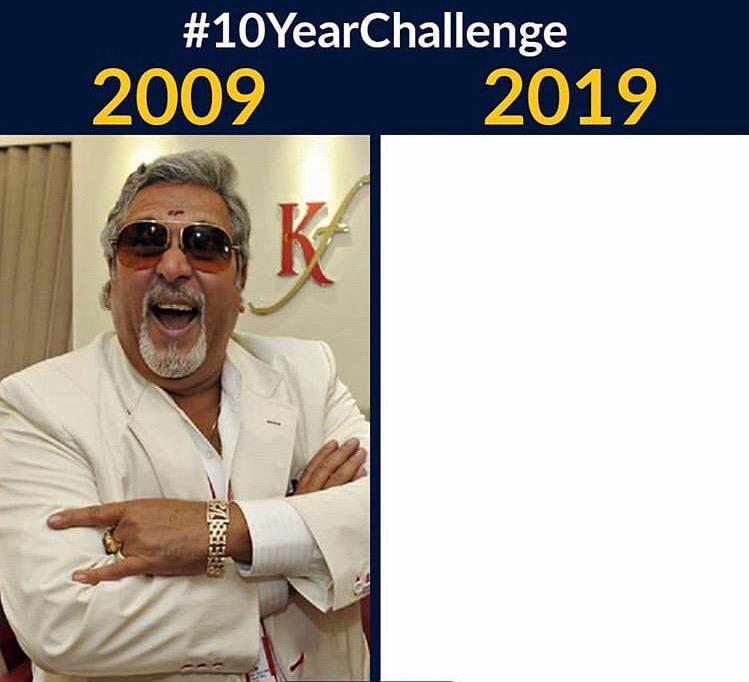 Among all the 10 year challenge post, another funny mention was Vijay Mallya. Back in 2009, we saw Mr Mallya enjoy a lavish lifestyle. But, fast forward 10 years and where is he today? Well, living a vanish lifestyle we suppose.

The one thing that has truly made a change in the last one decade is technology. It has evolved at a rapid pace. Back in 2009, none of us knew about selfie cameras, 8K televisions, smartphone gaming and so much more. And, in today’s time, we depend entirely on technology and all the gadgets around us. If you haven’t figured out the drastic evolution that technology has made in the last 10 years, then here’s a look! 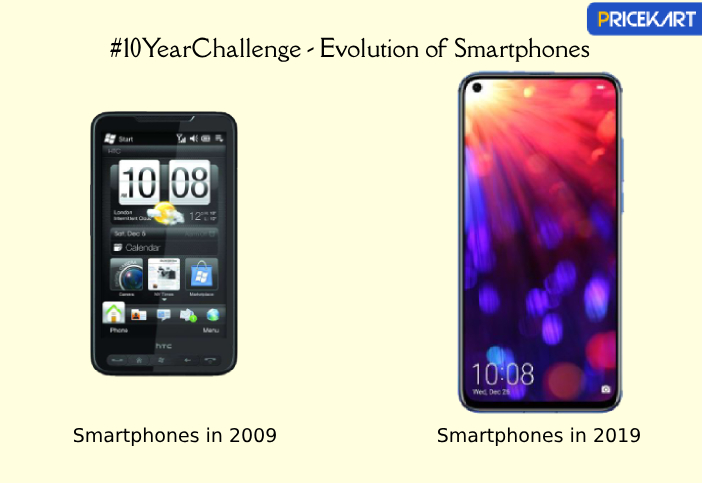 Mobile phones: From small & block-like mobile phones with small displays and thick bezels in 2009, today we have punch hole display mobile phones that are thin, sleek and bezel-less. 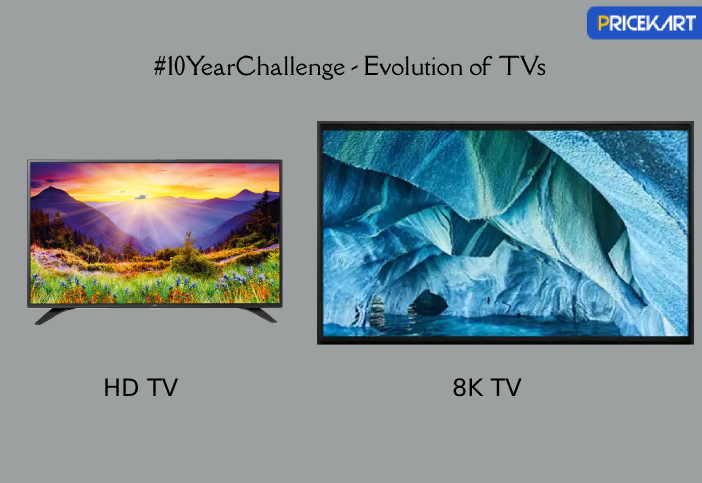 Televisions: 2009 was the year when HD Televisions came to life in a full swing. Watching content in 1080 pixels (High Definition) was a trend back then. Now, we have Ultra HD 8K Televisions that offer four times greater resolution than a 4K TV. These televisions come with a total number of 33,177,600 pixels. 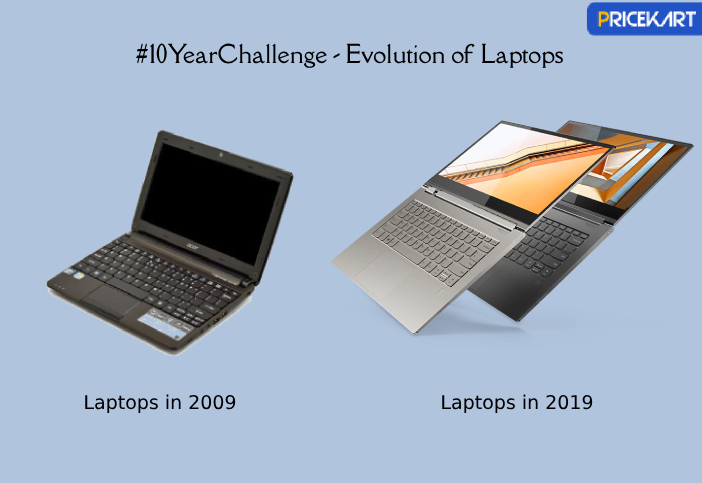 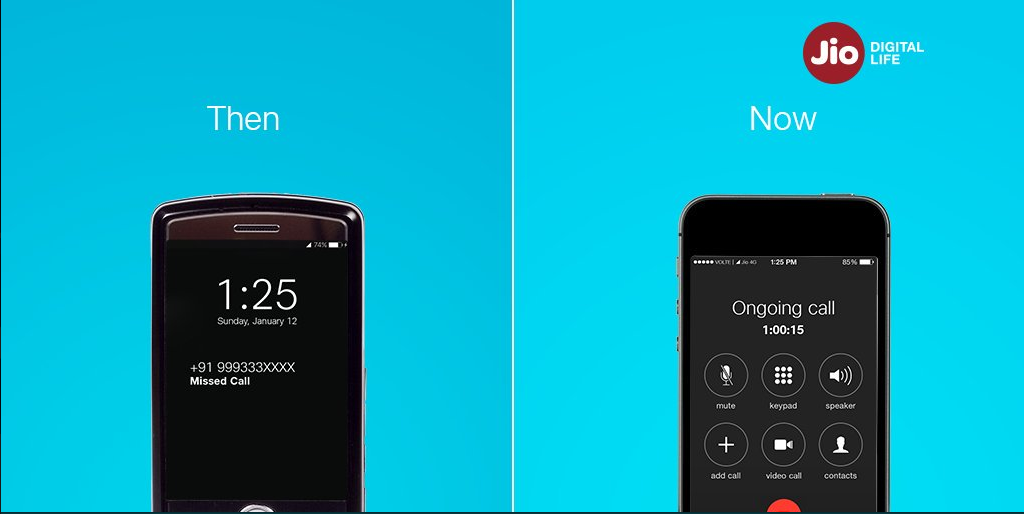 Unlimited Data & Free Calling: Remember the time when giving missed calls was a trend because call charges were so high? All thanks to networks like Jio, Airtel & Vodafone, now we can talk for hours together without worrying about phone bills. Plus, the added benefit of unlimited data allows us to binge watch our favourite shows and movies. 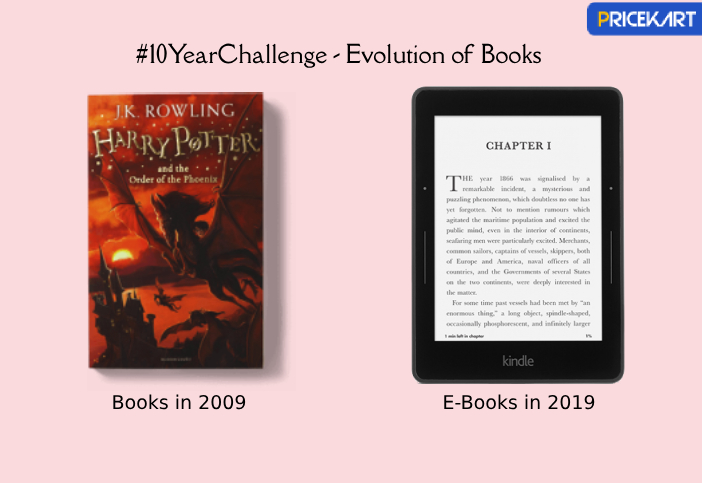 Books: Reading was all about the feeling of handheld books until e-readers made an appearance. In 2019, a lot of people prefer e-books compared to actual books. Which one do you vouch for? E-books or handheld books?

Age is just a number, right? Bollywood celebrities have also taken to Instagram to share their #10YearChallenge posts. Looking at these images, you are sure to say that these celebs look as young as ever. Who says getting older means you cannot look good? These celebs are an inspiration to a large population of the youth. Take a look at how they looked then and how they look now.

Karan Johar must have aged 10 years, but he looks young as ever even today. A lot of people will say that Sonam Kapoor is a lot like her father. Even after a decade, she looks pretty much the same – Gorgeous as ever. 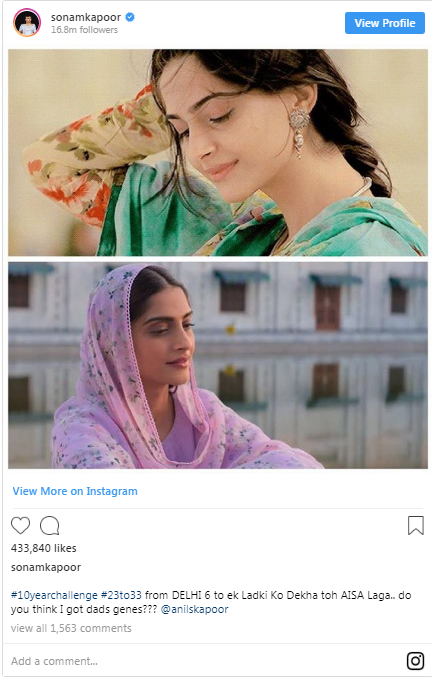 If anything, Diana Penty looks like a diva today. This Bollywood star has striking looks that have captured the hearts of millions. 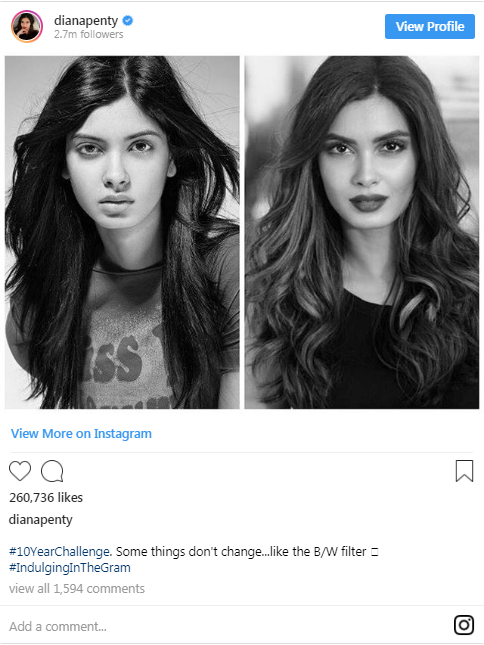 Guess who has not aged at all? Like these 10 years hasn’t caused even the tiniest change? Well, a meme of Bollywood actor Anil Kapoor has been making its round during this 10 year challenge. And, we totally agree with it. 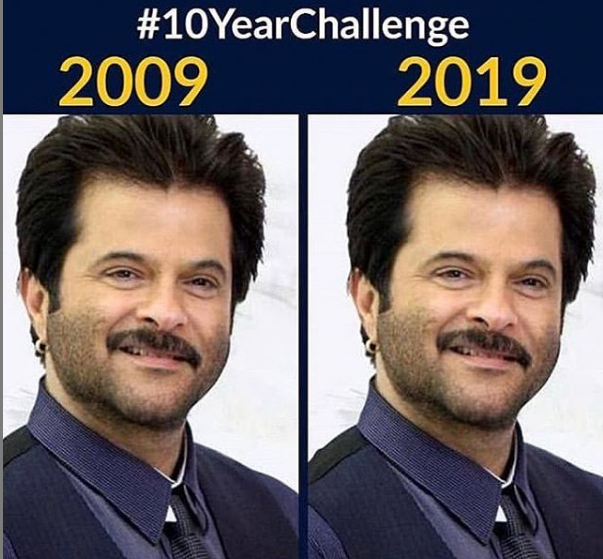 If Bollywood celebs are flaunting off their grace, then the Hollywood stars are not far behind. The new viral trend even saw famous Hollywood celebrities take part. Here’s a look!

Reese Witherspoon hasn’t aged at all in the last 10 years. Well, at least that’s what it looks like. She looks as charming as ever! 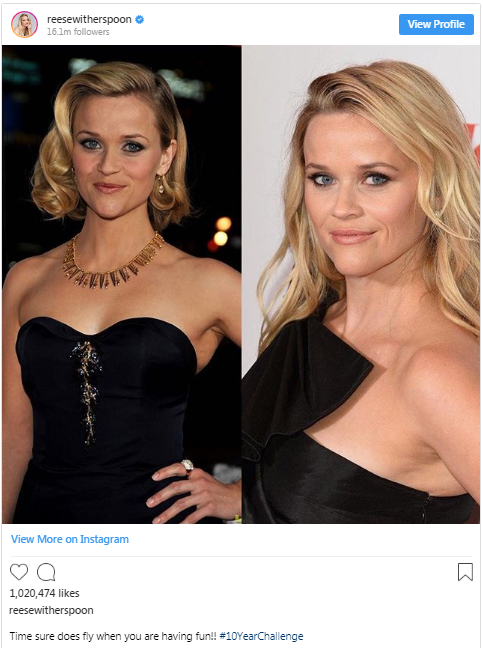 We have all grown up watching Ellen on her very show called – ‘The Ellen Show’. She is a comedian, a host, a writer, a LGBT activist, and most of all a true inspiration. Ellen DeGeneres also shared a picture proving to us that age is just a number; you have got to feel young and alive. Mark Ruffalo famously seen as ‘The Hulk’ in the Avenger movies shared a picture of himself and his wife. He also took this challenge to tell his fans about his #20yearsmarriage. 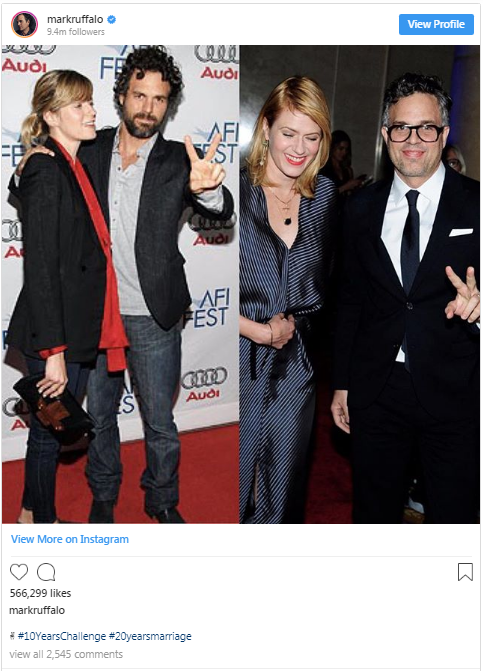 A lot of images in terms of global warming have come up during this challenge. There are pictures showing the ice melting in Antarctica, polar bears going extinct because of melting ice caps, coral reefs and marine life dying out, heaps of plastic in oceans, and so much more. Global warming is something that scientists have been warning us about over the years. And, if you think that global warming is just a myth, you need to take a look at these global warming posts. 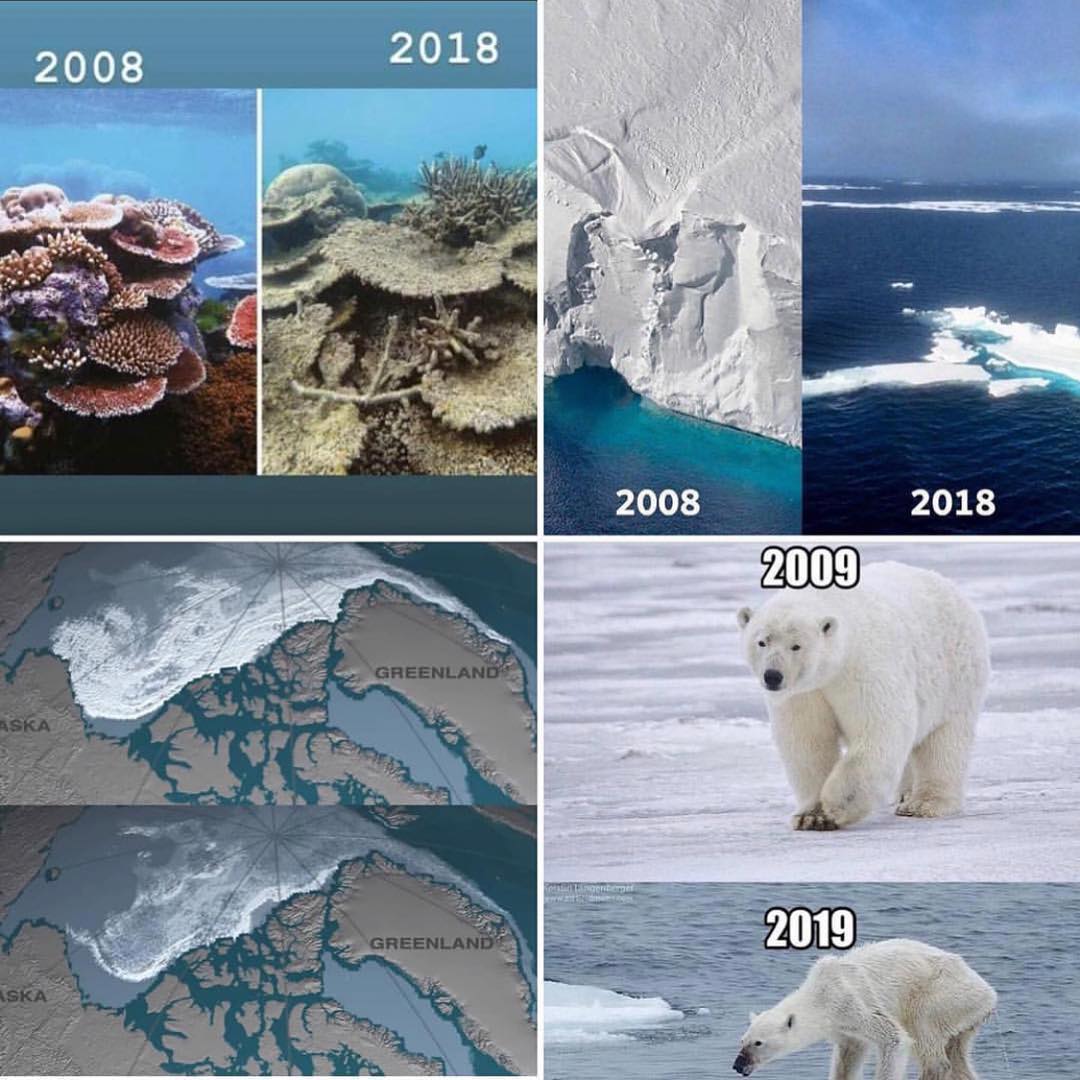 If the last 10 years have caused such a drastic change, imagine what the next 10 years could do. People who have used this social media trend to talk about global warming are trying to pass on an important message that is slightly more important than selfies. Climate Change is real, and if we don’t do something about it, we are going to be in a big mess for real. 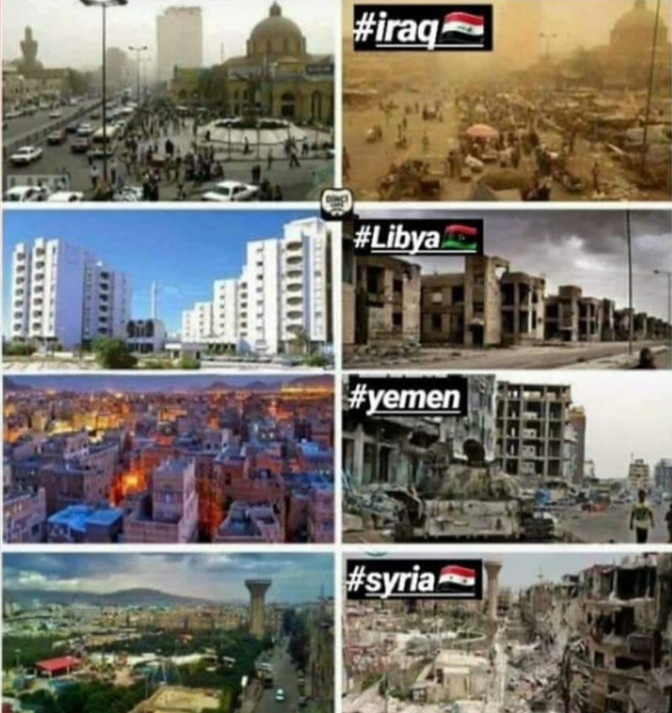 Among all the hilarious and self-transformation posts, there have also been posts about the Syrian war. The wall of fear in cities like Syria, Yemen, Iraq and Libya are at a peak. Cities standing tall and beautiful 10 years ago are only rubble today. War has never been the answer. And while we cannot do anything to change what’s happened, we can change to build a better feature. No words can define the heart-wrenching pain that looking at these pictures bring.

Well, our Indian sportsmen are not going to fall back in the midst of an ongoing trend. From cricketers sharing a photo of themselves or ICC taking this opportunity to share some photos, there are quite a lot of interesting posts of our Indian players. Most of us have grown up watching and idolizing these players. These posts are sure to bring a smile on your face, take a look! 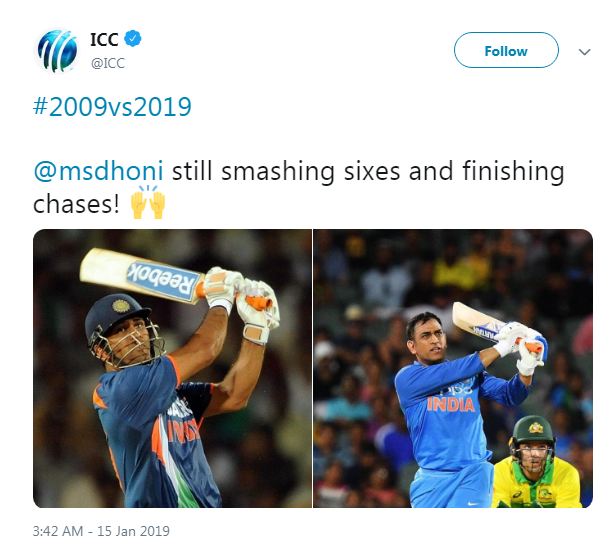 At the beginning of this week, the Indian cricket team defeated the Australia team in the second ODI. Dhoni grabbed the win for India with his stellar performance. The former captain hit a brilliant six in the final over – finishing the game in style. And, the International Cricket Council took to twitter to appreciate the former captain. 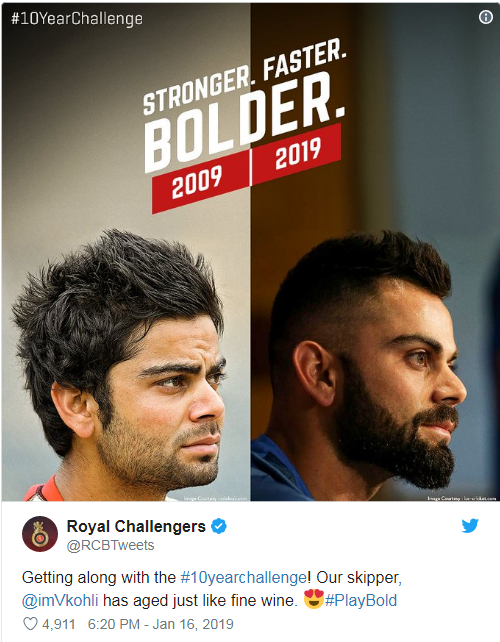 The captain of the Indian cricket team has gone through a transformational change in the last decade. Just like fine wine, Virat Kohli has aged to become a fine cricketer and one of the best batsmen. It’s fair to say that Virat is shouldering the responsibilities of being the Indian cricket captain with a lot of grace and energy. The official page of Royal Challengers Bangalore also made use of this opportunity to appreciate the captain. 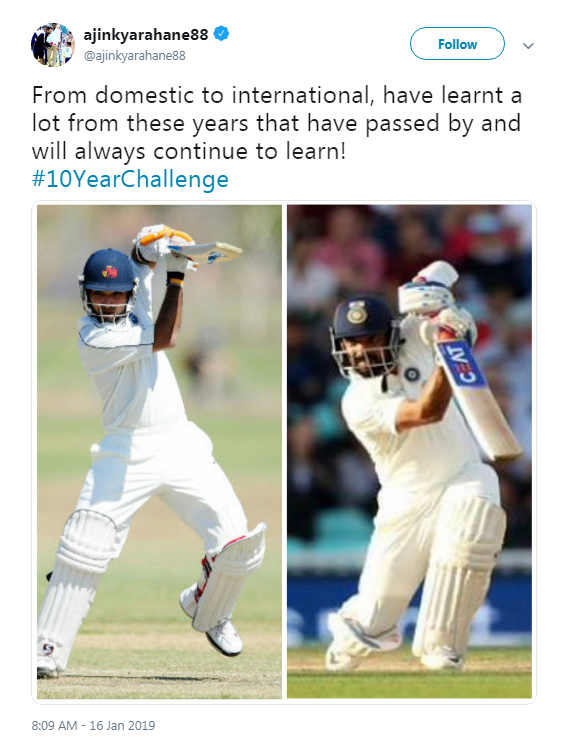 Ajinkya Rahane – A middle-order batsman in the Indian Cricket team post a picture of himself showing the transformation in the last 10 years. His caption reads – ‘From domestic to international, have learnt a lot from these years that have passed by and will always continue to learn!’ Ashwin Ravichandran posted a picture of himself during the lpl 2009 in South Africa and a picture from 2019. He also tagged Dinesh Karthik to take up the challenge. 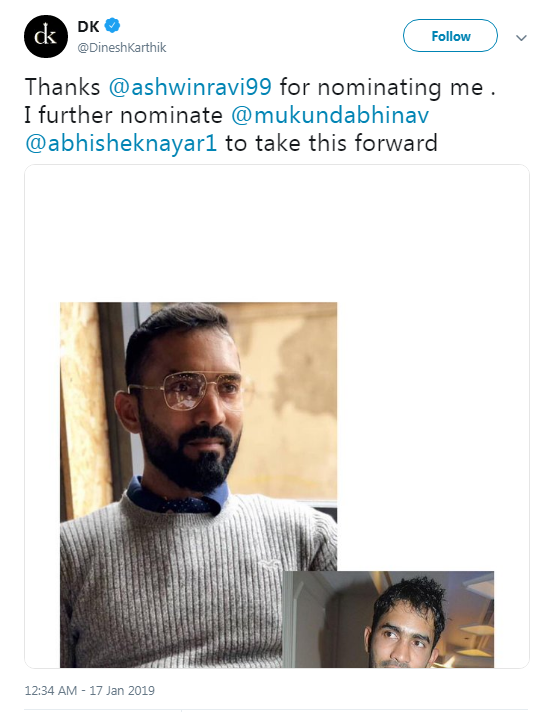 Taking up the challenge, even Dinesh Karthik showed us a picture of himself 10 years back in time.

Well, we have finally reached the end of our best 10 year challenge posts across the internet. It’s legit to say that a lot has happened during the last 10 years. Let’s wait and see what new trend will emerge on social media in the next couple of weeks!