It has been all over the internet that Vivo is gearing up to launch a brand new smartphone, Vivo Nex this month. To be announced on June 12, Vivo Nex is expected to arrive in three different models – Vivo Nex, Vivo Nex S and Vivo Nex A, as per a recent report.

Amidst all these speculations and rumours, an alleged spec sheet of the Vivo Nex has been spotted online, revealing that the upcoming Vivo smartphone will carry a 6.01-inch Full HD display. Speculated to have barely any bezels on either side of the phone, the Vivo Nex could sport a near 100 percent body-to-screen ratio. Additionally, this smartphone from the dual 4G VoLTE mobiles price list will allow users to use two SIM cards with 4G connectivity.

Inside, the phone will be powered by a Qualcomm Snapdragon 710 chipset coupled with 4GB RAM and 64GB of internal storage. Similar specs have already been confirmed on GeekBench. Reports have hinted that an improved variant of the Nex would be launched too. The improved version is expected to be equipped with a Snapdragon 845 chipset combined with 6GB of RAM. 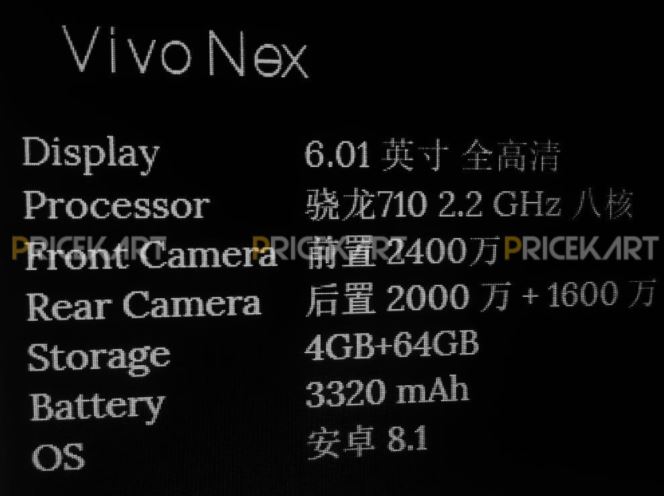 The leaked sheet has shed light on Vivo Nex’s cameras as well. The Vivo Nex will have a dual rear camera setup. The device will flaunt a set of two camera lens – 20-megapixel and 16-megapixel on the back of the phone. At the front, the phone will have a 24-megapixel selfie snapper, reveals the leaked spec sheet.

In terms of battery, the Vivo will be fueled by a 3320 mAh battery. The smartphone will support quick charging. As far as the operating system goes, the Vivo Nex will run Android 8.1 Oreo.

Previous reports have claimed that the Vivo Nex will be another device from the company to have an on-screen fingerprint scanner. The company has already teased a poster with a smartphone having in-screen finger scanner.