You are at:Blog»News»Samsung Galaxy Watch Active to Debut on Feb 20: Take a Look at the Specs

Along with its much awaited upcoming smartphones, Samsung is also working on a new smartwatch. The South-Korean giant is most likely to announce its Samsung Galaxy Watch Active on February 20 at the Unpacked event. At this event, Samsung will also announce its Galaxy S10 series and Galaxy F smartphone (foldable). Furthermore, the upcoming Galaxy Watch Active will come as the successor to the previously launched Samsung Gear Sport smartwatch.

Along with a confirmed launch date, some of the specification details of the smartwatch have also surfaced online. Until now, all the previous Samsung smartwatches have featured a physically rotating watch dial. This dial made it easier for users to navigate or scroll through the display. However, according to rumours, the new Galaxy Watch Active might not come with the rotating dial feature. Let’s take a look at some of the specifications of this upcoming smartwatch. 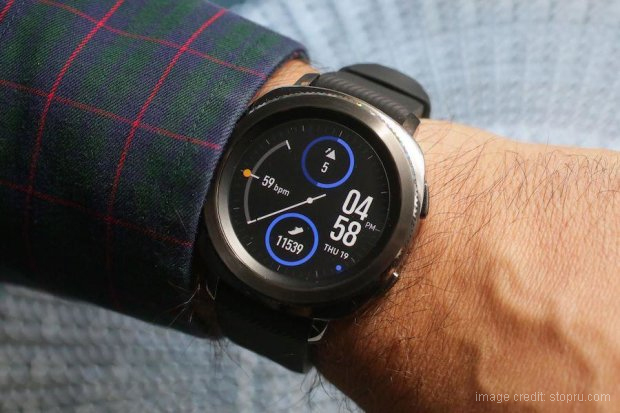 The smartwatch will come with a 1.1-inch AMOLED display. Without a rotating bezel ring, users might find it a tad bit difficult to navigate through the features on the display. When compared, Samsung Gear Sport launched with a 1.2-inch display along with a rotating bezel ring for easier navigation. Moreover, even the battery on this smartwatch will be smaller than the one seen on its predecessor.

The Samsung Galaxy Watch Active will pack a 236mAh battery. On the other hand, its predecessor came with a 300mAh battery. A smaller battery might majorly be because Samsung has reduced the overall size of the smartwatch. For charging, this smartwatch will come with a redesigned charger. The wearable will sit horizontally on a small pad at a 90-degree angle. Seeing that the Samsung Galaxy S10 smartphones will feature reverse wireless charging, this new charging feature on the smartwatch is convenient.