You are at:Blog»News»Rumours»Samsung Galaxy J7+ Leaked Online Flaunting these Features 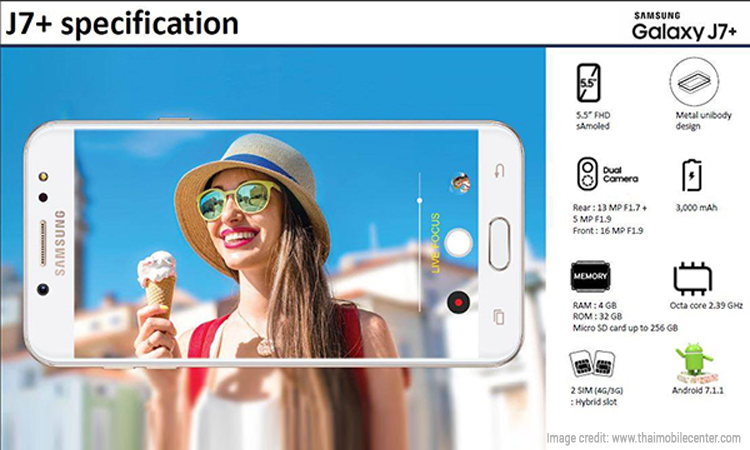 According to a Gadgets360 report, the Samsung Galaxy J7+ is expected to feature a 5.5-inch full-HD (1080×1920 pixels) Super AMOLED display. The phone will run on Android 7.1.1 Nougat OS. The upcoming Samsung mobile will come equipped with an octa-core processor paired with 4GB of RAM, 32GB of internal storage which is likely to get upgraded up to 256GB using microSD card.

Moreover, the Samsung Galaxy J7+ is expected to come with Samsung’s in-house virtual assistant, the Bixby. Apart from this, the phone will come with facial recognition and a fingerprint sensor embedded in the home button.

Samsung previously had introduced the face recognition technology to the mid-range smartphones such as the Galaxy J7 Max and Galaxy On Max; the Galaxy J7+ will be a new addition to this list. To recall, the Samsung Galaxy J7 Max launched in India alongside the Galaxy J7 Pro in June this year.

Samsung Galaxy J7+ is likely to be offered in Gold, Pink, and Black colour options and is claimed to be launched soon in Thailand, as per the report. It will be a dual-SIM mobile with a 3000mAh battery.