In 2018, Xiaomi introduced its sub-brand called POCO. The latest brand has only launched one smartphone till date named the POCO F1. This smartphone immediately became a fan-favourite for offering flagship-like features and processor in an affordable price range. It was the mobile phone below 20000 to run on the Qualcomm Snapdragon 845 processor. While we were expecting the smartphone brand to launch POCO F2 next, the POCO F1 Lite has appeared online instead.

The listing on Geekbench reveals the processor, RAM and OS details of the smartphone. It has been listed with the codename, ‘Uranus’. From the specifications, it is clear that F1 Lite is a less powerful device compared to its predecessor. Instead of Snapdragon 845, this smartphone will run on the Snapdragon 660 processor. From a flagship processor, Xiaomi has now opted for a mid-range processor.

It will be backed by 4GB of RAM. Additionally, according the listing, the smartphone will run on the latest Android 9 Pie operating system. Apart from this, the smartphone will come with a 3.5mm headphone jack. Even the POCO F1 might be one of the dual camera mobile phones. Apart from this, the listing does not reveal any other specification details. 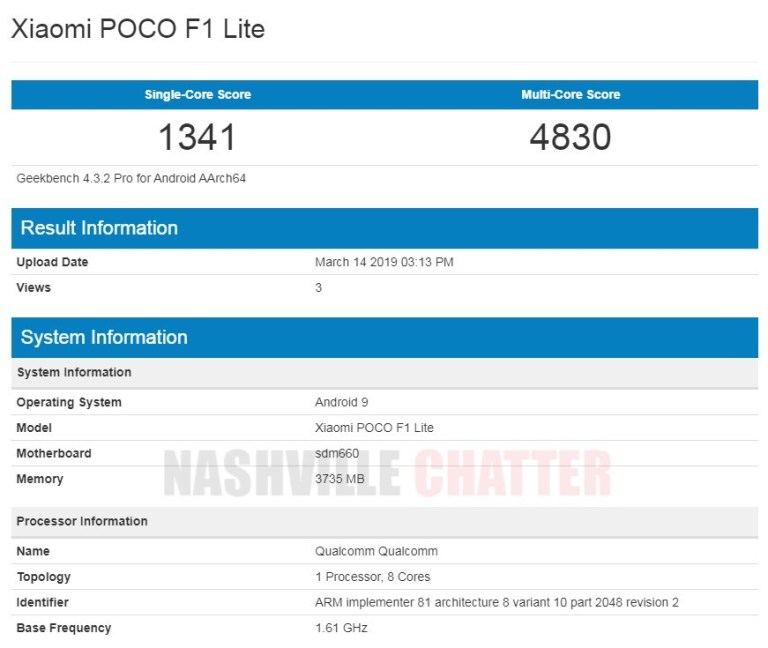 This is all that is known about the rumoured POCO F1 Lite smartphone as of now. However, these rumours should be taken lightly. There is no confirmation is this smartphone will actually make its way to the markets. We will know further details about this smartphone in the coming weeks.