You are at:Blog»News»Oppo F7 Official Specifications Revealed Ahead of Launch: Read Them All

Oppo India has recently announced that it will be launching its upcoming flagship smartphone in India on March 26. On Friday, the company has revealed the key specifications of the Oppo F7 smartphone via a press note. The alleged smartphone model will be a successor to last year’s Oppo F5.

The launch of Oppo F7 is scheduled to take place by the end of this month; however, we already know much about the specifications and design of the handset. It will come with an iPhone X-like notch on the display and will pack artificial intelligence (AI) features. Like other smartphones in Oppo’s F-series, the F7 will be a selfie-centric handset.

The Chinese smartphone maker announced that the launch event will be held in the presence of three Indian cricketers- Ravichandran Ashwin, Rohit Sharma and Hardik Pandya. This will certainly help the brand to attract cricket lovers to their latest offering. Oppo has previously teased the presence of Indian cricketers with its upcoming handset and asked fans to identify cricketers. 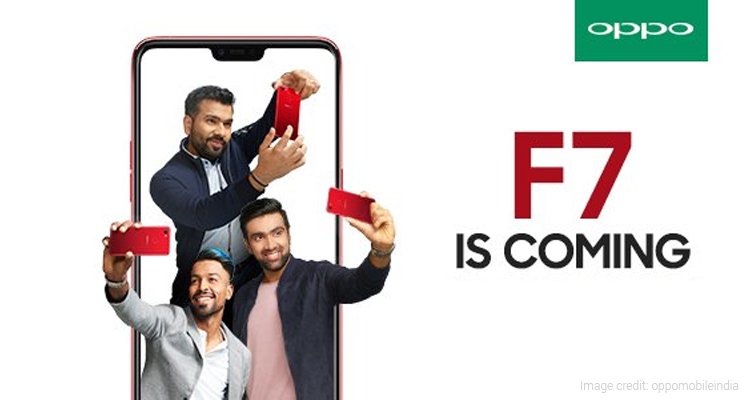 According to the press note shared by Oppo, the latest Oppo smartphone will sport a 6.2-inch Full HD (1080×2280 pixels) display. The screen has a Super Full-Screen panel which boasts 19:9 aspect ratio and 89.09 percent screen-to-body ratio. The phone will come preloaded with ColorOS which is a custom UI by Oppo. There won’t be any physical button present on the front panel; instead, the navigation can be done using various gestures.

For selfies, there will be a 25MP front-facing camera with advanced beautification features. The camera module will feature AI Beauty, AI selfie, and Real-time HDR functions. The users will be able to route AR stickers and cover shots directly inside the camera app. In addition, Oppo has announced that there will be an App-in-App view which will allow users to record and share the videos of the game-play of their favourite games on the device.

Like mentioned above, Oppo will be launching its F7 smartphone on March 26. The company haven’t shared the price and availability of the upcoming device.