The South Korean tech giant, LG is reportedly planning to launch a new device called LG G7 ThinQ. The phone has been in the rumour mill for past few months. Also, the phone has been leaked several times and we already know that it will launch in five colour options. The smartphone is rumoured to have iPhone X-like notch on top of its display.

According to previous leaks, the phone will come in Raspberry Rose, Platinum Grey, Moroccan Blue, Moroccan Blue (Matte), and Aurora Black colour variants. LG has already confirmed the naming of the upcoming device. It has also revealed that the G7 ThinQ will be launched at an event on May 2 in New York. 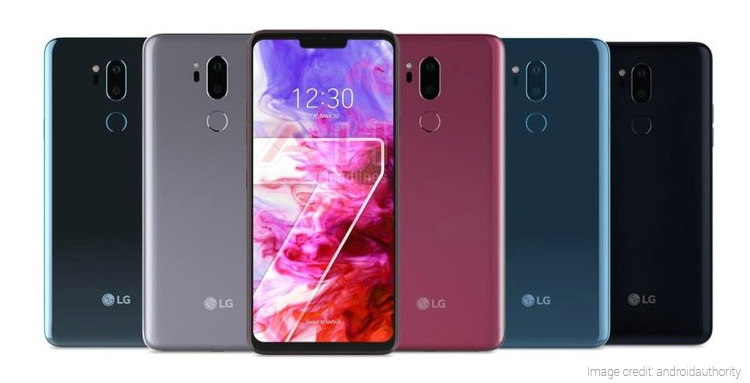 As per a report published on AndroidHeadlines, the LG G7 ThinQ will have an iPhone X-like notch and a new vertical dual rear camera setup. Also, there will be an LED flash module and a dedicated fingerprint scanner at the rear. On the right edge, the phone has a lock button, while the left edge includes volume rockers and an extra button. This extra button is supposed to be a trigger for the activation of a virtual assistant.

Prior to this, another report suggested that the LG G7 ThinQ will be first LG smartphone to feature an aperture of f/1.5. Having such camera module will help users to enhance the quality of photographs as well as videos shoot in low light conditions. Moreover, the report claimed that it will come equipped with a Qualcomm Snapdragon 845 SoC paired with 6GB of RAM and 64GB of internal storage.

The rumours so far are suggesting that the LG G7 ThinQ will have a 6.01-inch Quad HD+ OLED display and a cheaper variant of the device will come with LCD display. For photography, there will be a dual camera setup at the rear which will consist of two 16MP sensors.

Furthermore, the handset will have an 8MP selfie shooter at the front which will double as a webcam for video calling. A 3300mAh battery will complete the package. The phone is also rumoured to support wireless charging and high fidelity DAC. Separately, the renders of the LG G7 smartphone was leaked last week.