You are at:Blog»Comparison»Apple iPhone XR Vs Samsung Galaxy A9: Which Premium Affordable Smartphone Steals the Limelight?

The one thing that has become apparently clear in the recent few years is that – Apple and Samsung are highly competitive when it comes to staying a step ahead of each other. Apple is famous for its sophisticated and expensive smartphones. On the other hand, Samsung offers a selection of high-end and affordable mobile phones. According to Statista, Samsung has maintained its leading position in the global smartphone market since 2017, with Apple following closely behind. 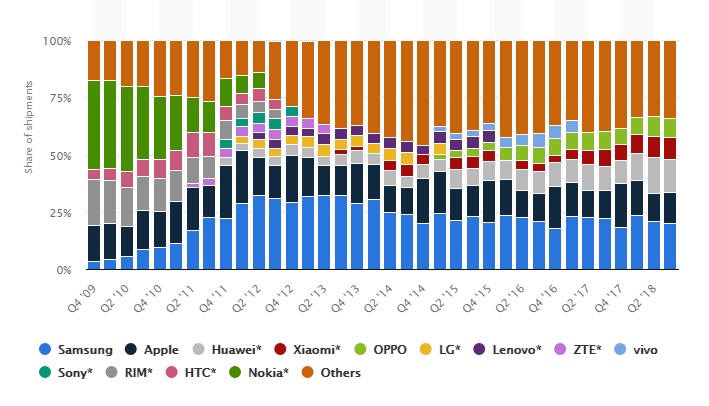 To change things around, Apple introduced its most affordable smartphone this year called the ‘iPhone XR’. At the same time, Samsung made headlines as well by introducing the world’s first quadruple camera smartphone called the ‘Galaxy A9 (2018)’. Both these ‘affordable flagship smartphones’ launched at the same time and are currently competing against each other in the market. Will Apple’s most affordable iPhone stand out compared to Samsung’s latest offering? In our Apple iPhone XR Vs Samsung Galaxy A9 comparison, find out which one offers a better value for money. 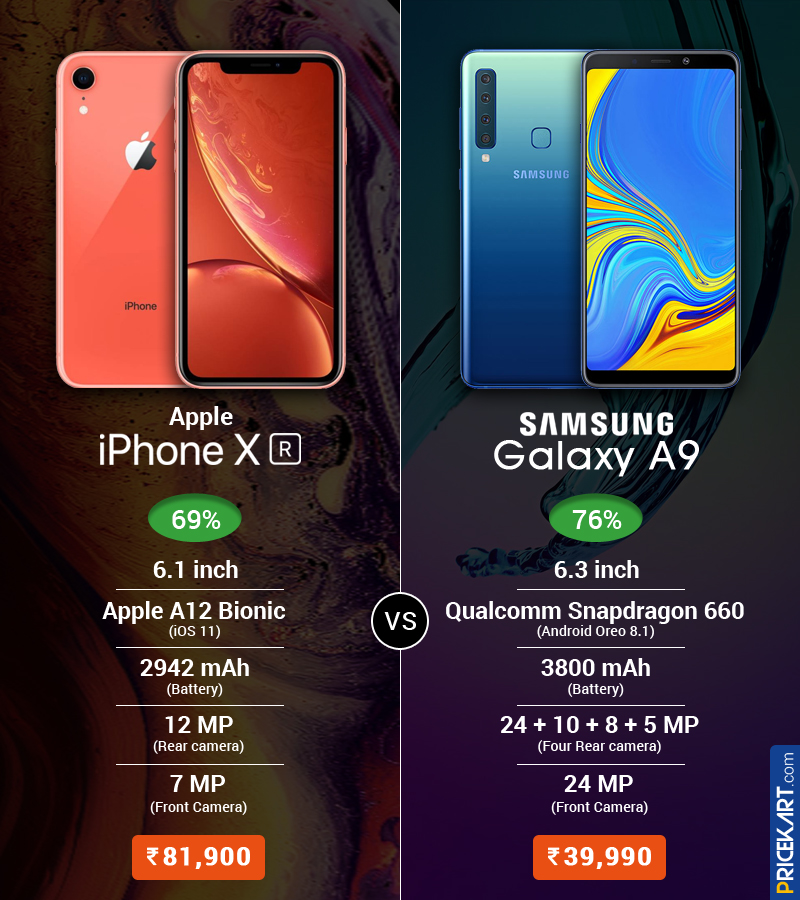 Looking at the image above, let’s take a look at how both the smartphones are fairing overall in terms of features, specifications and price.

Which Phone offers a Better Display?

When it comes to large-screen smartphones or mobiles phones with a 6-inch display or more, the advantages outweigh the disadvantages. And while there is not a lot of difference in the screen size of both iPhone XR and Galaxy A9, Samsung wins in terms of the display by a slight margin. However, both the smartphones are an ideal pick if you are looking for big screen mobile phones.

In terms of the processor, iPhone XR is powered by the A12 Bionic chipset. It is the latest processor designed by Apple. Currently, the A12 Bionic is the most powerful processor there is. On the other hand, Galaxy A9 is running on a mid-range Qualcomm Snapdragon 660 processor. Comparatively, Qualcomm Snapdragon 660 is no match to the powerful A12 Bionic chipset. So, if you are looking for a smartphone with powerful hardware, then the Apple iPhone XR is a better pick.

Looking for a Large Battery?

In all honesty, if you an Apple fan, then you will be happy to know that iPhone XR has the best battery life seen on any iPhone before. However, it is safe to say that Galaxy A9 offers much more in terms of battery life. So, if you are looking for a phone that can provide for your extensive usage, you know where to look.

Unlike all the previous Apple iPhones, the iPhone XR comes with a decent camera. On the other hand, unlike all the triple camera mobile phones that we see these days, Samsung stole the show by introducing the world’s first quadruple camera smartphone. Take a look at the camera specifications:

On the whole, it is easy to guess that Samsung offers a better camera experience. With a depth sensor and ultra-wide sensor, you cannot go wrong with capturing the perfect pictures. Additionally, Samsung has also incorporated AI features in the Galaxy A9 smartphone. But, we have to wonder do we need multiple cameras on smartphones for amazing pictures? While iPhone XR does a pretty decent job, it fails to beat Samsung’s impressive camera functionalities. A single rear camera is a little less impressive compared to a quadruple camera setup.

Apple iPhone XR Vs Samsung Galaxy A9: Which Phone Offers Value for the Money?

After considering all the features, pros and cons of both iPhone XR and Galaxy A9, it is time to consider which one offers the best value for the money spent.

Pricing Details of iPhone XR: (on the basis of storage)

Pricing Details of Galaxy A9: (on the basis of RAM + storage)

Final Takeaway on Apple iPhone XR Vs Samsung Galaxy A9

Both the smartphones offer impressive features and specifications, but on the whole, Samsung stands ahead of iPhone XR on a lot of fronts. iPhone XR is termed as the ‘cheapest iPhone’, but it fails to compete against all the mid-range smartphones in the market because of its sky-high price. Similarly, at a competitive price tag, Samsung offers so much more on the Galaxy A9 (2018) smartphone.

In fact, the smartphone offers betters specifications than the ones seen on Samsung Galaxy S9 and Galaxy S9+ smartphones. So, between iPhone XR and Galaxy A9, Samsung takes away the trophy. We conclude by saying that, if you are looking for a premium smartphone that won’t cost you too much, Samsung’s Galaxy A9 is sure to impress you.