You are at:Blog»News»Xiaomi Redmi X Confirmed to Launch on February 15 with In-Display Scanner

A couple of weeks back, Xiaomi confirmed that it will launch Redmi smartphones as a separate brand. Xiaomi Redmi Note 7 was the first smartphone of the Redmi series. Now, it has been confirmed that the second smartphone called the Xiaomi Redmi X will also make its debut next month. A poster has appeared online which confirms that smartphone will make its launch on February 15 and will come with an in-display fingerprint sensor.

However, there is no confirmation as to the authenticity of this alleged poster. But, a lot of sources also claim that it is an official poster. This means we could actually get to see the smartphone next month. Nevertheless, Xiaomi is still to officially confirm the launch date of the Xiaomi Redmi X smartphone. Apart from this, not much is known about this smartphone. 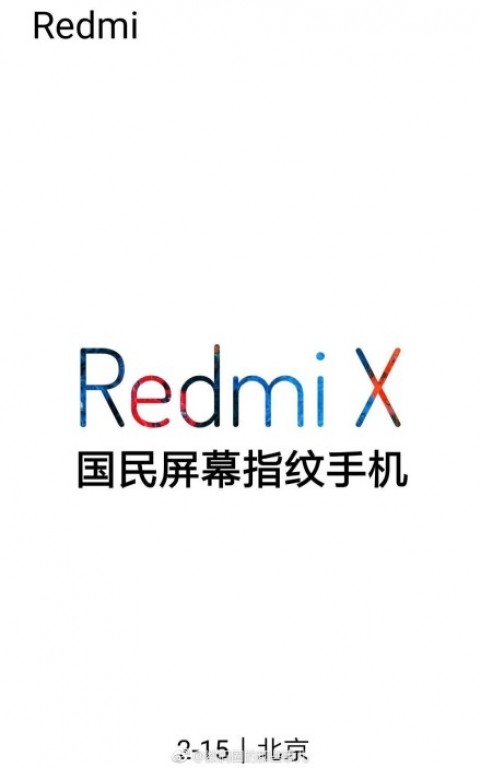 The poster mainly focuses on the launch date and in-display fingerprint scanner. In the last couple of weeks, we have seen a couple of OEM’s launch in display fingerprint sensor mobile phones. Usually, Xiaomi Redmi phones are priced in the mid-range segment. The company has only used the in-display scanner on its flagship devices. Looking at this, it can be safe to assume that Redmi X will be little high-priced and will not exactly be termed as a budget mobile phone. However, the device will not be as expensive as the flagship models.

Additionally, it has also been speculated that the Xiaomi Redmi X smartphone will be powered by the Snapdragon 710 chipset. Furthermore, it is not officially confirmed if Redmi X is the actual name of the upcoming Redmi smartphone. The device could most likely also launch as the Xiaomi Redmi Note 7 Pro. If this turns out to be true, Redmi Note 7 Pro will be the upgraded version of Redmi Note 7 with enhanced features. We can expect further details to be revealed as we make our way towards the expected launch date.