Vivo is finally bringing its V15 Pro smartphone to the Indian markets. The Vivo V15 Pro smartphone has been scheduled to launch on 20 February, 2019, at 12PM at an event held in New Delhi. Much like the Vivo NEX, even the V15 Pro smartphone will come with a pop-up camera mechanism. Interestingly, the smartphone comes with the tagline of – world’s first 32MP pop-up selfie camera. The live streaming of the launch event kick started on YouTube at 12:15PM IST.

Some of the first few highlighted specifications on the smartphone that were announced at the event were – pop-up camera, in-display fingerprint sensor, bezel-less display and a triple camera setup. Here are the actual features, specifications and price of the V15 Pro smartphone in India based on the live launch. Take a look! Additionally, the display also has the proximity sensor hidden below the display. The smartphone will be available in Blue and Red colour options. As mentioned above, it is one of the in-display fingerprint scanner mobile phones. 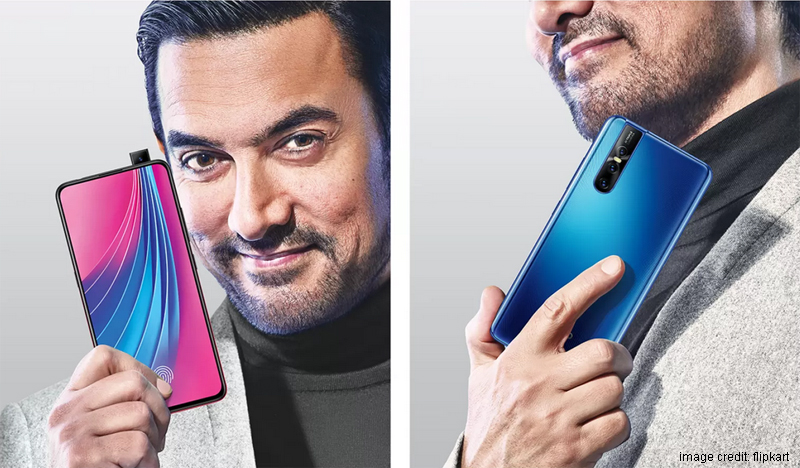 Under the hood, it will be powered by a Snapdragon 675 chipset. It is the first smartphone to run on the Qualcomm Snapdragon 675 mobile platform. This processor is equipped to handle web browsing, social media launch, AI performance, game launch and music launch. On the storage end, the V15 Pro smartphone sports 6GB RAM and 128GB internal storage. Overall, the smartphone offers an amazing gaming experience.

On the battery end, the smartphone comes with a powerful 3700mAh battery. Additionally, it is one of the quick charging mobile phones to support dual engine fast charging.

Lastly, the Vivo V15 Pro comes with a price tag of Rs 28,990. Pre-booking of this smartphone starts from February 20. It will finally go on sale on 6 March 2019. It will be available on both major online and offline platforms.