Sony has recently launched a new mirrorless camera in the Indian market. The new camera is called as Sony A7R III aka Sony Alpha 7R III which is a full frame mirrorless camera. It was previously launched last month at an event in New York. The Sony A7R III is priced at Rs 2,64,990 for the body. It will be made available for purchase from November 24 in India.

The SEL24105G lens for A7R can be separately purchased at a price of Rs 1,09,990. The Sony A7R III is a successor to the A7R II that was launched in 2015. The new camera comes with faster burst shooting and offers better autofocus performance. 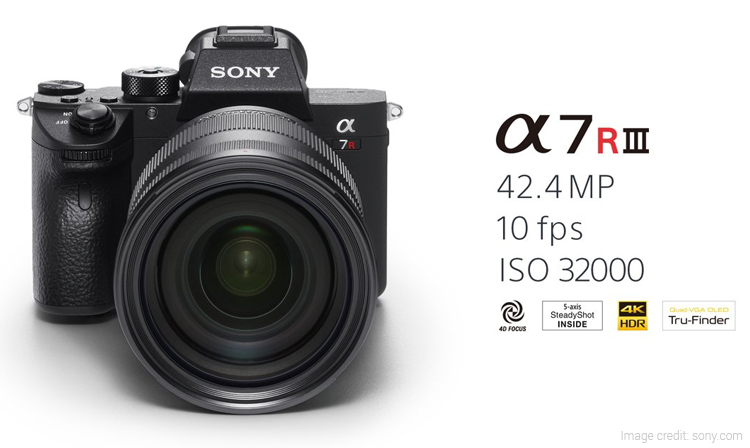 The sensor in the Sony A7R III has a 42.2MP BSI CMOS sensor with front-end LST. Furthermore, the sensor has an updated BIONZ X image processor which is claimed to be up to 1.8 times faster than the A7R II. The burst shooting speeds of A7R III is almost twice as the speed of the A7R II. It also captures 10fps with full autofocus by pressing the mechanical or electronic shutter.

Furthermore, the users can capture up to 28 uncompressed or 76 compressed RAW images while shooting in burst mode. The maximum ISO can be set in a range of ISO 25600 to ISO 32000. The latest Sony camera can get precise focusing even in a low light condition of up to -3 EV. To get still images, the camera has a 5-axis image stabilisation in the body.

The A7R III supports 399 PDAF points which cover around 68 percent of the image area. Moreover, there are 425 contrast detection AF points. It has high sensitivity features, wide dynamic range and support for noise reduction.

The other features include the higher resolution OLED electronic viewfinder, USB Type-C 3.1 port, and dual SD card slots. It has a 3-inch touchscreen display with touch focus feature and has an ‘AF On’ button. There is a joystick on the back of the camera for navigation and moving the focus points. The A7R III can record 4K videos. It can record the 1080p videos at 120fps.