You are at:Blog»Android»Smartron srt.phone to Launch Today in India By Sachin Tendulkar

Smartron is about to unveil its new smartphone in India which is going to be an exclusive Sachin Tendulkar-branded smartphone called as the Smartron srt.phone. The launch event is scheduled to start at 11:30 am IST in New Delhi on Wednesday, May 3. The smartphone is expected to be unveiled by cricketing legend Sachin Tendulkar.

Citing the sources, according to a report by Gadgets360, the Smartron srt.phone will be a Flipkart exclusive smartphone and it will be launched in presence of Sachin Tendulkar. The report mentioned that they have confirmed the details from the handset company.

The latest mobile called as the Smartron srt.phone is likely to be the first product in a series to carry the signature aspects around Sachin Tendulkar. Also, Sachin is a brand ambassador for Smartron. The company has recently posted a tweet promoting the event in which Smartron confirmed that a new smartphone with moniker srt.phone is on the way to the Indian market and it will be launching on May 3. 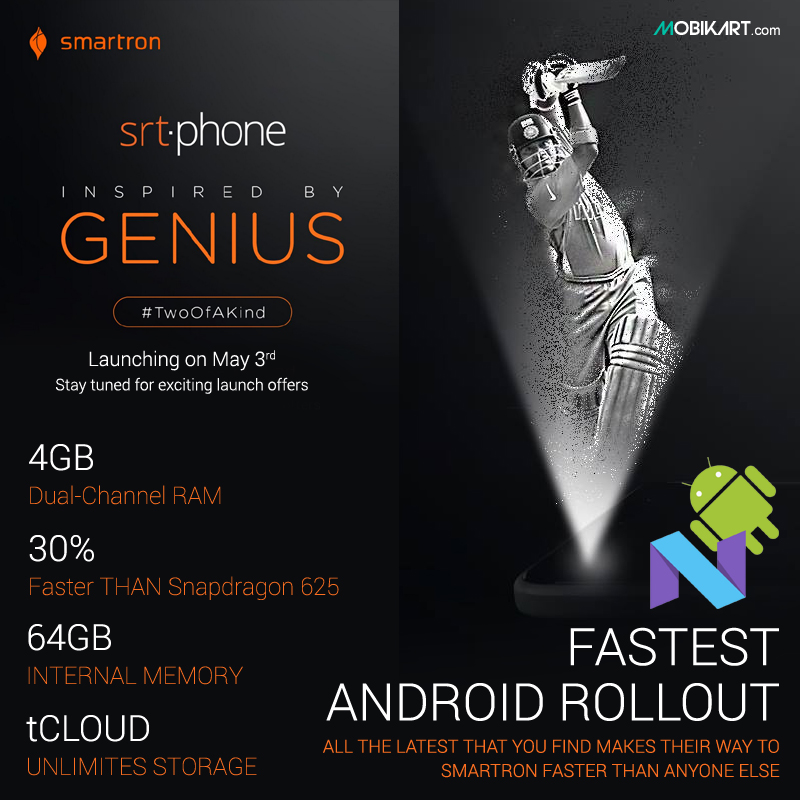 Smartron India is a young startup which has only two products in its portfolio as of now. Moreover, with Smartron srt.phone, the company will improve its product lineup and extend its business. Currently, the company has its Smartron t.phone and Smartron t.book hybrid laptop-tablet.

This May Interest You: Phones Below Rs.25000 in India

The Smartron t.book was the first product from the company. It released last year in March at a price of Rs 39,999. Later, it launched its first smartphone called as the Smartron t.phone for Rs 22,999 in May last year. Now, the srt.phone will be the second addition to its smartphone space.

The startup has recently appointed Amit Boni as Vice President of Sales and Marketing at Smartron India. Amit Boni was formerly a Motorola India executive. He will be responsible for the functions of brand building and will head the sales and marketing activities for Smartron. Furthermore, the company has also appointed Sanjay Jha to its board of directors with immediate effect. Sanjay Jha was a former chairman and CEO at Motorola Mobility.

Smartron India had confirmed that cricketer Sachin Tendulkar who serves as the brand ambassador of the company has funded and an undisclosed sum to the company last year. Lastly, Smartron India was founded by Mahesh Lingareddy.