You are at:Blog»Latest Updates»Foldgate: Why is the Samsung Galaxy Fold Breaking after a Day’s Use?

2019 was termed to be the year of foldables! After a really long wait, we were finally introduced to the first ever foldable smartphone when Samsung announced its Galaxy Fold smartphone in February this year. After months of waiting, Samsung finally sent out a few review units of its Samsung Galaxy Fold to popular journalists and reviewers. With a whopping price tag of $2000, you would expect the world’s first foldable smartphone (also the most expensive smartphone) to work like magic. It is currently one of the top trending mobile phones in the market. However, things have turned out to be a little different than what we expected. Most of the review units experienced display failure just a day or two after being delivered. Some reviewers experienced display failure, while some experienced constant flickering. The most important question at this point is – why is this happening?

Why is the Samsung Galaxy Fold Breaking?

According to sources, the smartphone comes with a special protective film on the display. Removing this layer may cause damage to the smartphone. This layer is meant to protect the OLED foldable display from any damage. The foldable smartphone most definitely comes with a warning label that advises people to not remove the layer. However, this warning comes in small print. Moreover, some reviewers have also claimed that the Galaxy Fold unit they received did not come with any warning against removing the layer. With this layer being so important, Samsung should have taken protective measures to ensure that users do not peel it off. And why did the company not mention this at the Samsung Unpacked Event 2019? Before we take a look at what Samsung has to say about this issue, here’s a look at all the Galaxy Fold smartphones that have been damaged so far.

Steve is a tech editor at CNBC who also received the Galaxy Fold two days back. He shared an 8 second video of the Galaxy Fold just after a day’s use. In the video, you can see the display flickering unsteadily. This tweet was soon followed by another one which clearly shows that half the display of the Galaxy Fold is absolutely black. Interestingly, Steve Kovach is one of the few people who did not remove the protective layer on the display.

After one day of use… pic.twitter.com/VjDlJI45C9

Mark Gurman of Bloomberg also got to experience massive issues with the display of the Galaxy Fold he received. In his tweets, he talks about how the display of his Samsung Galaxy Fold is broken and unusable in just two days. Unfortunately for Mark, he removed the protect layer on the display not knowing that wasn’t supposed to. This caused major issues with his foldable smartphone. Towards the end, the display is completely black and seems to be dead.

The screen on my Galaxy Fold review unit is completely broken and unusable just two days in. Hard to know if this is widespread or not. pic.twitter.com/G0OHj3DQHw

Popular tech YouTuber Marques Brownlee also faced troubles with his Samsung Galaxy Fold device. The display of the Galaxy Fold spazzed and blacked out as soon as Marques tried to peel off the protective layer. However, he will soon receive a replacement and will give us insights on how well the new device works.

I got this far peeling it off before the display spazzed and blacked out. Started over with a replacement. pic.twitter.com/ZhEG2Bqulr

Dieter Bohn is the executive editor at The Verge. Even Bohn had to deal with some major problems with the display panel of the Samsung Galaxy Fold. According to Dieter Bohn, “there’s something pressing up against the screen at the hinge, right there in the crease.” He went on to add, ““It’s a distressing thing to discover just two days after receiving my review unit. More distressing is that the bulge eventually pressed sharply enough into the screen to break it.” 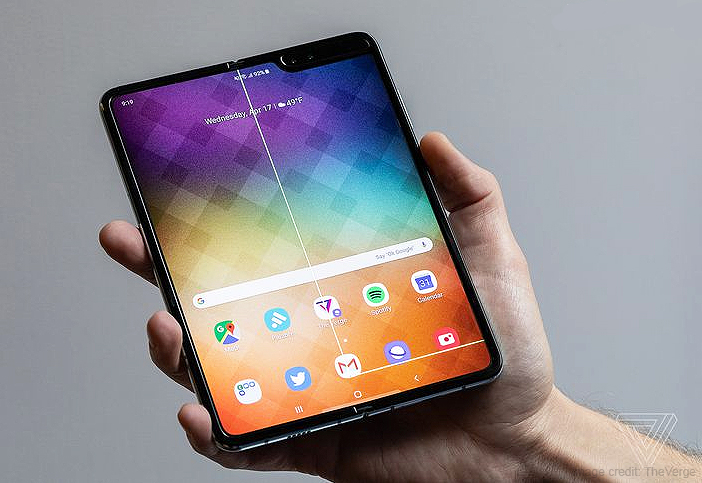 What is Samsung’s Answer to this Problem?

After noticing so many issues with its Galaxy Fold, Samsung has finally issued a statement to The Verge. Samsung has not confirmed if removing the protective layer is causing the problem or if it is something else altogether. However, the company has assured to look into the matter. Here’s a look at the statement:

A limited number of early Galaxy Fold samples were provided to media for review. We have received a few reports regarding the main display on the samples provided. We will thoroughly inspect these units in person to determine the cause of the matter.

Separately, a few reviewers reported having removed the top layer of the display causing damage to the screen. The main display on the Galaxy Fold features a top protective layer, which is part of the display structure designed to protect the screen from unintended scratches. Removing the protective layer or adding adhesives to the main display may cause damage. We will ensure this information is clearly delivered to our customers.

We hope Samsung will figure out a way through this mess before anymore foldable smartphones are damaged. Along with being the first foldable phone, Galaxy Fold is also one of the first 5G mobile phones.