You are at:Blog»News»OnePlus 5 Launching Today- Everything you need to Know

The OnePlus 5 smartphone is scheduled to get launched at 12 pm EDT (9:30 pm IST). The launch event of the device will be made available for live-streaming from the company’s official US website. The company is hosting a pop-up event in New York on June 20. Similar pop-up events will also be organised in Berlin, Paris, Copenhagen, and Amsterdam on June 21.

While in India, the smartphone is scheduled to get released on June 22. The company will hold pop-up events in Mumbai, New Delhi, Bangalore, and Chennai over the next two days. The fans can experience the new handset and can directly buy the OnePlus 5 smartphone from these events. 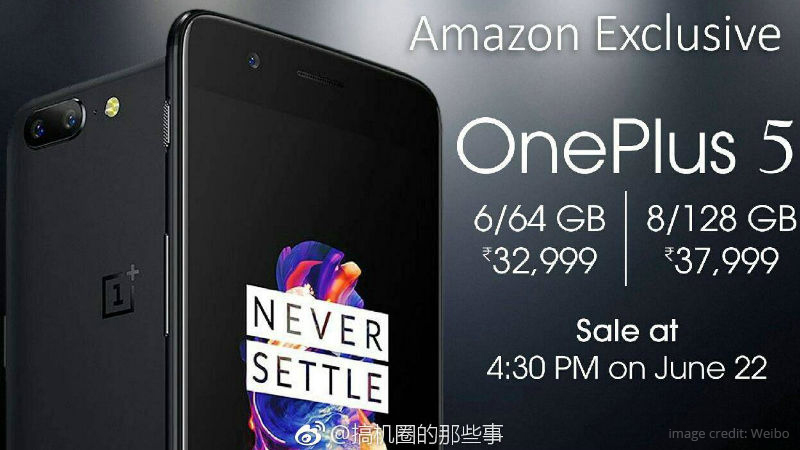 The smartphone is expected to be the most expensive OnePlus mobile in the history. The device has been tipped to be priced approximately at Rs 32,999 for the 6GB RAM + 64GB storage model, whereas the 8GB RAM + 128GB storage model will cost Rs 37,999 in India. The OnePlus 5 is going to be launched at 2 pm IST at an event in Mumbai on June 22. Moreover, the device will be made available for sale on the same day at 4:30 pm exclusively on Amazon India.

Coming to the specifications, the OnePlus 5 is likely to come with Qualcomm Snapdragon 835 SoC clocked at 2.3GHz. It will feature a 5.5-inch full-HD (1080×1920 pixels) display, although Quad-HD display has been rumoured in the past for the device.

The smartphone will offer a primary dual-rear camera module with 20MP + 16MP sensors on it. The prior sensor supports aperture of f/2.6, while the later sports aperture of f/1.7. Up front, there will be a 16MP selfie shooter. The handset will receive power from a 3000mAh battery.