You are at:Blog»Innovation»Meizu Zero: What Features Does the World’s First Portless Smartphone Offer?

Surprisingly, the first smartphone trend of 2019 is here. And it is something that we weren’t expecting. Meizu Zero is the world’s first ‘holeless’ smartphone. Or, in other words, it is the first smartphone to come without any physical buttons or holes. As a matter of fact, the smartphone has also let go of the physical volume control buttons and the USB charging port. This gives the phone an uninterrupted seamless design. The smartphone makes use of wireless technology to carry out functions like charging, audio output, data transfer and much more. This also makes Meizu Zero among the first truly wireless charging mobile phones.

To make things more interesting, the smartphone also comes with an IP98 rating which makes it dust and water resistant. You will be wondering, how the smartphone works without any ports or buttons. To clear your confusion, here is a look at the most interesting features of the world’s first portless smartphone. 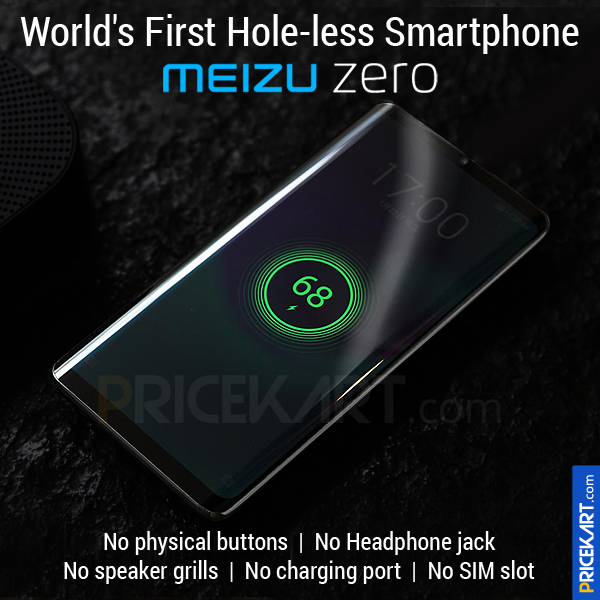 Some of the most important buttons on a smartphone are the power on/off and the volume rockers. By removing physical buttons, Meizu has incorporated virtual buttons with the help of the ‘Pressure Sensing Technology’. When pressure is applied, these virtual buttons provide haptic feedback which will allow you to turn on and off the smartphone or increase and lower the volume.

Yes, the smartphone has also eliminated the SIM card tray. Instead of physical SIM cards, the Meizu Zero smartphone will support eSIM. The eSIM feature means the phone will support a virtual SIM. Among the latest mobile phones in India, only a few devices such as iPhone XS and Google Pixel mobiles support the eSIM feature. An eSIM is long for embedded or electronic SIM card. These SIM cards cannot be removed like a regular SIM card. They are much smaller in size and will soon replace physical SIM cards.

Apple was the first smartphone company to let go of the headphone jack. Wireless headphones are a pain for some and a boon for some. Nevertheless, Meizu Zero has eliminated on the headphone jack and speaker grilles. In its place, the smartphone comes with the mSound 2.0 feature on its display. In simpler terms, the display acts as a speaker and earpiece. A similar feature was also seen on the Xiaomi Mi Mix.