You are at:Blog»Android»Lenovo Phab 2 Pro, the First Google Tango Phone Might Arrive in November

Lenovo Phab 2 Pro, the world’s first Tango Smartphone made by Lenovo has already missed its launch schedule in September. Instead, the company delayed the release of the Phab 2 Pro smartphone. Now, a Google representative, Clay Bavor, who is the head of VR at Google, has confirmed that the official release of Lenovo Phab 2 Pro will take place in November.

In case you haven’t heard about the Lenovo Phab 2 Pro, it was announced this year at the Lenovo Tech World event back in June. The upcoming mobile has been made by Lenovo with collaboration with Google. The smartphone is likely to be priced at $499 (roughly Rs. 33,300) on launch.

It will be the world’s first android phone to utilize the AR and VR technologies to sense and map the nearby places. The company has claimed that the smartphone will provide you AR and VR experience as pervasive as the GPS. The technology is supposed to be as intelligent as it will recognize your room size and even judge the occurrence of people in it.

The Project Tango is hyped to transform the way of our interaction with the e-commerce, education, and gaming. And the technology is set to come in smartphone via Lenovo Phab 2 Pro.

The upcoming mobile Lenovo Phab 2 Pro will be capable of motion tracking, area learning, and depth perception thanks to its machine vision along with the camera and sensor setup on the device.

Along with the advanced AR and VR technology, the Lenovo Phab 2 Pro will also feature some really decent display and processing specifications. It will sport a huge 6.4-inch QHD (1400×2560 pixels) display. The upcoming mobile is expected to come with high-performance Snapdragon 652 octa-core processor paired with 4GB of RAM and 64GB of onboard storage. The device gets its juice from a 4050mAh battery and comes with Quick charge technology.

The upcoming mobile Phab 2 Pro by Lenovo mobiles is more focused on the augmented reality functions than virtual reality experience. That means the Phab 2 Pro will not be compatible with Google’s Daydream VR as it has an LCD display rather than an AMOLED display. However, Bavor has suggested that the upcoming mobiles might come with both Tango and Daydream VR support. 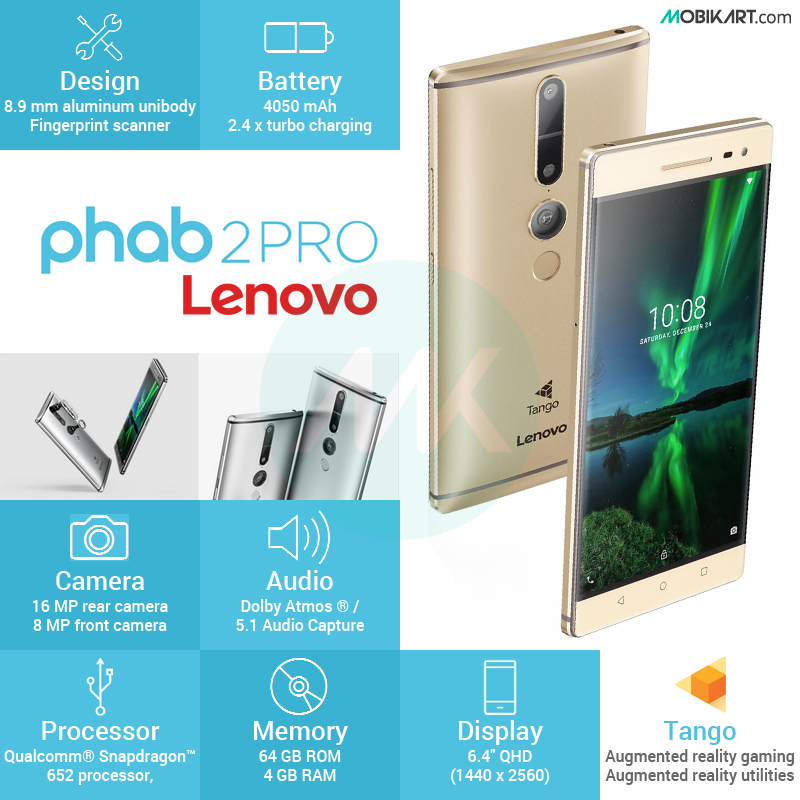