You are at:Blog»News»Renders of Galaxy View 2 TV-Style Tablet Have Surfaced Online

Currently, the only Samsung device that is circulating in the news is the Samsung Galaxy Fold. It earned the name of being the first ever foldable smartphone to make its debut. However, when Samsung sent out a few review units, they ended up experiencing some failure. While Samsung is working to resolve the screen issues with its Galaxy Fold, it has released new renders of the Samsung Galaxy View 2. Back in 2015, Samsung had launched the first Galaxy View Tablet. This tablet turned out to come with a huge 18.4-inch screen and an expensive price tag. Now after three years, Samsung is back with another huge tablet.

According to reports, the Galaxy View 2 will feature a 17.5-inch display. While it will definitely be smaller than its predecessor, it is definitely big compared to the other latest tablets in India. Additionally, the device looks compact and comes with a curved hinged kickstand (also seen on Galaxy Fold) that can be placed in a 30-degree angle. 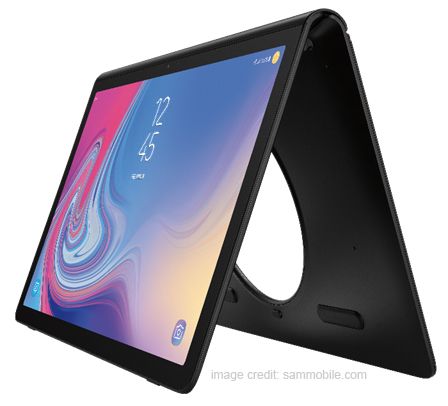 For its power, the tablet will run on an Exynos 7885 SoC which will be coupled with 3GB of RAM. As of now, the storage capacity has not been revealed. However, keeping in mind the latest Samsung mobile phones, we can expect this tablet to sport a minimum of 64GB internal storage. Furthermore, the tablet will run on the latest Android 9 Pie OS with the One UI skin on top.

The tablet will be available in a 4G LTE variant and a Wi-Fi only version. Both the variants will come with Bluetooth support. An S Pen might seem like a perfect fit for such a huge device. However, Samsung will not be adding the S Pen feature to its Galaxy View 2. Lastly, as of now the launch date of the tablet has still not been revealed by the company. But, we can expect it to launch in the upcoming months of May or June.