You are at:Blog»News»Reliance Jio Tops in 4G Network Reach; Airtel 4G is Still Fastest Among all: Report

The battle for mobile network speeds and coverage has just ignited once again. In a recent development, a wireless coverage mapping firm, OpenSignal has released a report which has revealed key details about the leading telecom companies in India. According to the report, Reliance Jio is the market leader when it comes to 4G coverage; whereas in terms of 4G speeds, it lags behind Airtel, Vodafone and Idea.

Earlier, a report by Ookla via Speedtest claimed that Airtel is the fastest 4G network in India. Now, OpenSignal report states that Reliance Jio is the market leader in terms 4G coverage in India. However, in terms of 4G speeds, Airtel is at the winning position. The other telcos- Vodafone, Idea and Reliance Jio follows Airtel in 4G speeds category. 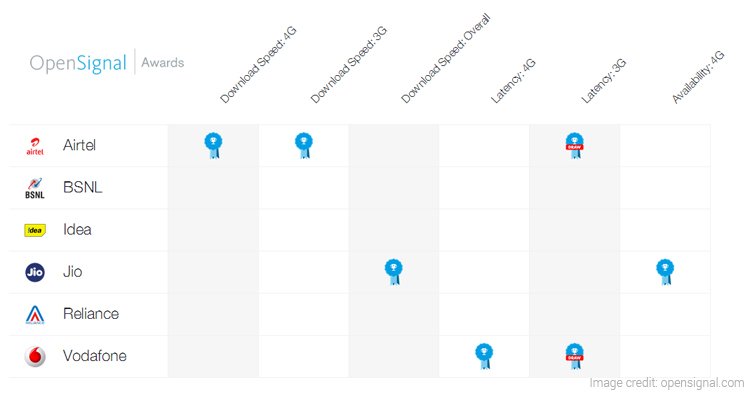 However, the overall download speed of Reliance Jio is still the highest than Airtel, Vodafone, Idea, BSNL, Reliance Communications (RCom).

While for 3G download speeds, Airtel is again leading with 3.62mbps which is followed by other telcos- Vodafone with 3.12mbps, Idea with 2.6mbps, BSNL at 1.76mbps, and Reliance Communication with 1.71mbps speed. It’s noteworthy that Reliance Jio only offers its services to the 4G network. So, the Reliance Jio services are only available for 4G VoLTE mobiles in India.

On the other hand, the overall average download speed which includes 3G and 4G network speeds. In this space, Reliance Jio offers speed at 5.81mbps which is best in the overall speeds. Later, Airtel comes with 5.05mbps, Idea with 3.69mbps, BSNL at 1.76mbps, and RCom with 1.71mbps.

Recently, Reliance Jio has offered its 4 feature phone called the Reliance JioPhone. The company has touted the price of the new phone as ‘free of cost’. The JioPhone is available at a price of Rs 1,500 as a refundable deposit which can be reimbursed after three years.

The Reliance JioPhone features a 2.4-inch QWVGA display that is powered by a 1.2GHz dual-core processor.