You are at:Blog»News»Realme 3 Codenamed as Realme RMX1833 Spotted Online

Oppo’s sub-brand Realme entered the smartphone market a couple of months back. The brand immediately earned a name for itself because of its affordable price tag and amazing features for smartphones in a mid-range budget. Recently, an unnamed Realme smartphone with the codename RMX1833 was spotted online. According to rumours, this smartphone is speculated to be the upcoming Realme 3 smartphone. However, it is safe to take this with a pinch of salt as there is no official claim yet.

Up until now, the brand has launched four smartphones in the Realme mobiles price list namely – Realme 1, Realme 2, Realme 2 Pro and Realme C1. If rumours are to be believed, then this phone will launch as the Realme 3 – successor to the Realme 2 smartphone. 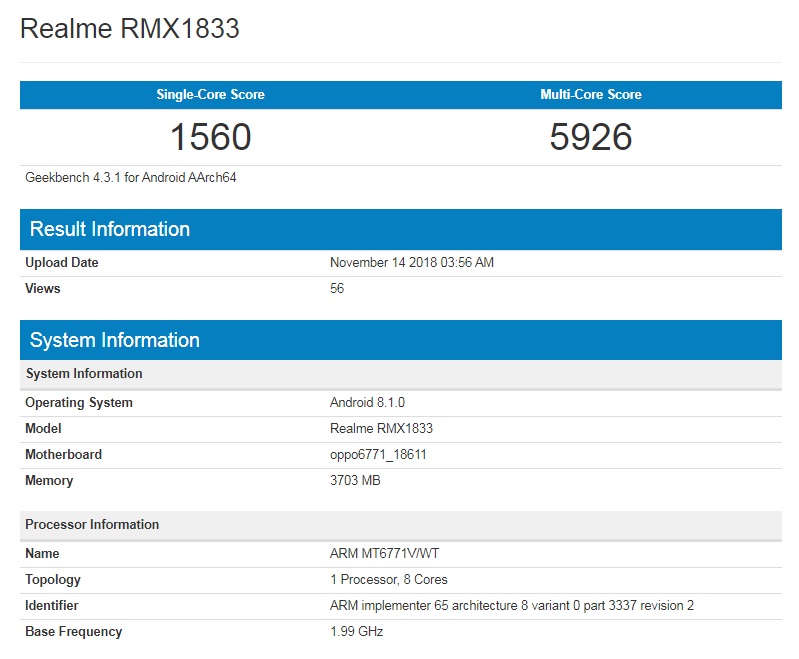 According to the specifications that have been spotted online, the Realme 3 smartphone which is codenamed as RMX1833 will be powered by a MediaTek Helio P60 octa-core processor. It will further be fuelled by 4GB of RAM. The smartphone will run on Android 8.1 Oreo.

Additionally, as per previous statements made by Madhav Sheth, CEO, the upcoming Realme phones would be supported with the VOOC fast charging technology seen on the latest Oppo smartphones. However, as of now, the listing of this smartphone does not reveal the support for the fast charging feature.

Apart from that, the smartphone is also believed to launch with a water-drop notch display, powerful battery and an enhanced dual camera setup. As of now, not much is known about the rumoured Realme 3 smartphone. We can expect this smartphone to make its debut early next year.