You are at:Blog»Android»Lenovo K6 Power – A Potentially Competitive Budget Smartphone

The Chinese giant Lenovo is all set to expand its product portfolio in the Indian market. Lenovo has teased the launch of its next K-series handset in India on Twitter, with a tweet “We know, you can’t get enough of the K series. Can you guess the name of the upcoming K?”

Further, a hashtag- #KickassPower was also mentioned that clearly suggests that the upcoming smartphone is Lenovo K6 Power which was previously showcased in IFA 2016 in Berlin alongside the K6 and K6 Note. Lenovo has been launching smartphones under Vibe and Moto range in the country. The handset is known as the Lenovo K6 Power and is available online on Pricekart in India. Let’s find out what Lenovo K6 Power has to offer.

The smartphone is said to be launched in Dark Grey, Gold, and Silver colour variants. Despite being a budget offering from Lenovo, the cellphone is said to sport a metal unibody design and and houses a massive 4,000 mAh battery unit. With mid-range hardware under its pocket, the smartphone will easily last for a day with a heavy usage.
Lenovo K6 Power features a 5-inch full-HD display with 1920×1090 pixels resolution. As far as the camera is concerned, the smartphone shall sport a decent 13MP rear camera with LED flash and a front 8MP selfie camera. 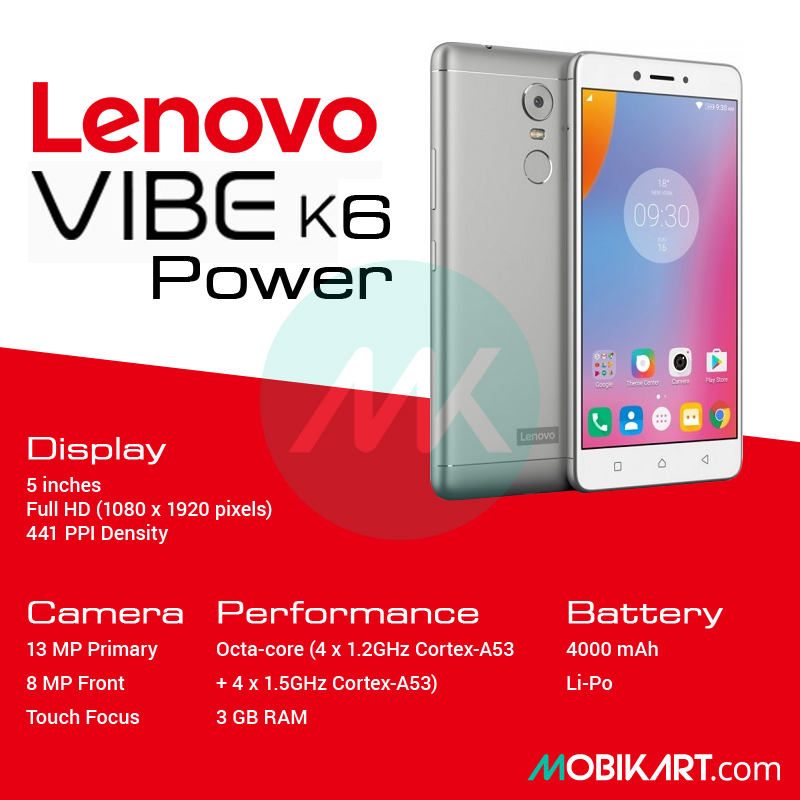 Under the hood, the Lenovo K6 Power runs Android 6.0 Marshmallow and features a fingerprint sensor at the rear side of the handset to enhance security. The Dual-SIM mobile also offers Dolby Atmos to enhance the sound experience. Connectivity options include 4G LTE, Wi-Fi 802.11 b/g/n, Bluetooth 4.1, and GPS.

Expected to be priced under Rs.10,000, the smartphone is powered by a 64-bit Snapdragon 430 octa-core processor with Adreno 505 GPU for graphics. It also showcases two RAM/storage bundles – 2GB RAM/ 16GB storage and 3GB RAM/ 32GB storage variants. The storage options can be expanded further via a microSD card.