You are at:Blog»Innovation»Everything You Need to Know about the World’s First Foldable Smartphone

After a very long wait, the world’s first foldable smartphone is finally here! After all the leaks, rumours, renders – the Samsung Galaxy Fold made its debut at the Samsung Unpacked 2019 event on February 20. It can be safely said that we are going to see a range of foldable smartphones make their launch this year. Like the name already says it all – a foldable smartphone can be folder to turn into a phone or a tablet. A foldable phone is an entirely new innovation that we have never seen before. Many major OEM’s are working on perfecting their foldable devices. Samsung is the first to finally bring its Samsung Galaxy Fold to life.

Along with its foldable phone, the company also announced a new range of devices at Samsung Unpacked 2019. To better understand the world’s first foldable smartphone, here are some of the most impressive features seen on the Samsung Galaxy Fold.

Given below is an infographic which details the highlighted features seen on the Samsung Galaxy Fold smartphone. 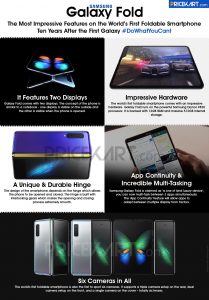 (Click on the image to view in full screen. This infographic can be shared on various platforms with proper credits to Pricekart.com)

The smartphone comes with two displays. One display is visible on the outside and the other one is visible when the phone is opened. The concept of this smartphone is pretty similar to a notebook. You open the smartphone to view it in a larger tablet-like display. When closed, the foldable smartphone measures 4.6-inch and sports an AMOLED display with an aspect ratio of 21:9. Similarly, when opened, the smartphone turns into a large 7.3-inch QXGA+ Dynamic AMOLED display.

You can make use of the two displays depending on your usage. The smaller mobile display can be used for simple tasks like calling, texting and social media. Likewise, the bigger tablet-like display can be used for gaming, watching movies and multi-tasking between different apps. Also, when folded, Galaxy Fold is compact enough to easily fit in your pocket.

It becomes pretty obvious that the world’s first foldable smartphone will come with amazing hardware. Under the hood it is powered by a powerful 7nm Qualcomm Snapdragon 855 or 8nm Samsung Exynos 9820 processor. For all its impressive multi-tasking capabilities, the foldable smartphone is backed with 12GB of RAM. Additionally, for storage the smartphone sports 512GB internal storage – which is massive.

Furthermore, the smartphone is backed by a powerful 4380mAh battery. To be fair, we expected the Galaxy Fold to be one of the 5000mAh battery mobile phones because of its powerful features and specifications. Moreover, just like the display, even the battery has been split in two halves to power both ends of the smartphone. Along with being one of the wireless charging mobile phones, Galaxy Fold also supports the fast charging feature. 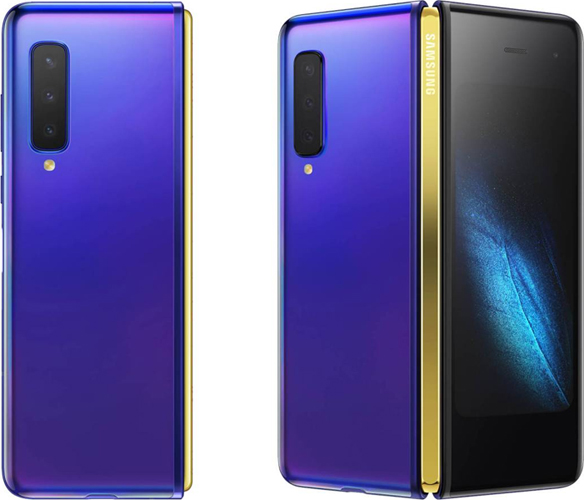 The foldable design of the smartphone pretty much depends on the hinge. It is the hinge that allows the Galaxy Fold to be opened and closed. It is a durable system which is built with interlocking gears which makes the opening and closing process extremely smooth. Additionally, the hinge is built to withstand constant opening and closing without a hitch. However, when you look at the smartphone, you will not see the hinge. This unique hinge is smartly hidden behind the spine for an elegant look.

The Samsung Galaxy Fold smartphone is claimed as ‘a one of kind luxury device’. And, the device is true to this claim. One of the most impressive and stunning feature on this phone is ‘App Continuity’. Until now, all the latest Android mobile phones only offer multi-tasking between two apps. However, with Galaxy Fold, multi-tasking between three apps has been made possible. This feature will allow apps to adapt between multiple display form factors.

All thanks to the massive 12GB of RAM, you can now multi-task between 3 apps simultaneously. For instance, it is now possible to watch a YouTube video while texting your friends and also browse through the internet at the same time. It is most definitely one of the coolest features of this smartphone. 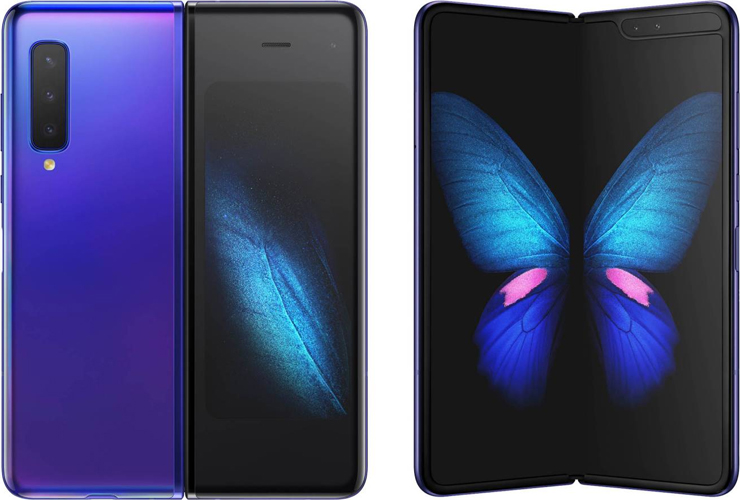 Six Cameras in All

Front Camera: The dual front camera setup comes with a 10MP selfie camera with f/2.2 aperture and an 8MP depth sensor with f/1.9 aperture. Samsung has focused on dual front camera mobile phones this time ‘round.

Cover Camera: On the cover, the foldable smartphone will feature a single 10MP selfie camera with f/2.2 aperture.